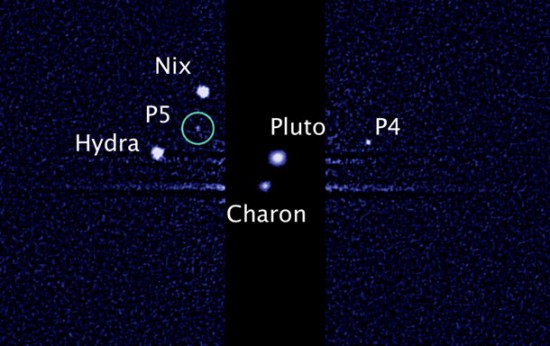 That’s right, folks! Everyone’s favorite trans-Neptunian object has a new moon! I’m not talking about the Stephenie Meyer book, here; I’m talking about a newly-discovered moon known as P5 orbiting that icy far away ex-planet. Chalk another one up to the Hubble Space Telescope for the discovery of Pluto’s fifth moon.

I assume he means that “Pluto has some company,” a typo made, no doubt, in frazzled excitement over the new discovery. The new moon is roughly 6 to 15 miles in diameter and was shown in a series of 14 images taken by the Hubble Space Telescope. The moon, known as S/2012 (134340) 1, but P5 among friends, was spotted on July 7 by Mark Showalter and announced via the above Tweet this morning. Saturday’s discovery brings Showalter’s Pluto-moon-spotting record up to 2/5 as he discovered P4 last year. Congrats to Mark, congrats to the Hubble, congrats to NASA, and of course, congrats Pluto. You’re still not a planet, though.