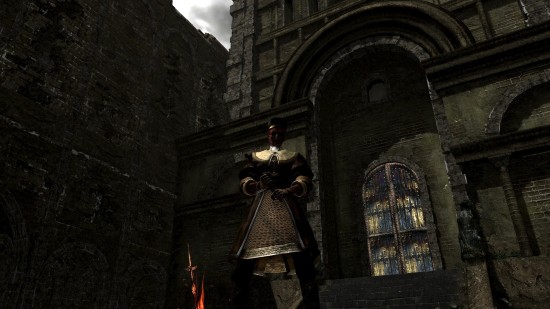 Dark Souls, the spiritual successor to From Software’s sleeper hit, Demon’s Souls, released for North American, English, and Australian consoles in October of last year. Today, however, the game finally released on the PC. Unfortunately, the game was slapped with a fixed resolution, pissing off PC gamers the world over. Thankfully, this is a PC game, and a random person who doesn’t work for From Software created a mod to fix the issue twenty-three minutes after the game’s release.

The PC port of Dark Souls was fixed to a subpar 1024 x 768 resolution, which might’ve been acceptable for a gaming rig many years ago, but not in the 1920 x 1080 (or 1920 x 1200) times in which we live. PC gamers wouldn’t stand for that kind of nonsense, and they’re right — what’s the point of shelling out a nice chunk of dough for a powerful rig when the things on it look like you didn’t shell out said dough for them to look good?

Luckily, the PC gaming community is full of awesome people who do awesome things in the blink of an eye. Some professional video game company made their port stuck in some unacceptable setting that the user couldn’t change? Never fear, some guy saved the day twenty-three minutes later. NeoGAF member Durante released a mod — we reiterate, only twenty-three minutes after the PC port of Dark Souls released — that fixed the resolution issue. He made it available to everyone for free, because like we said, the PC gaming community is pretty awesome when it needs to be.

Durante notes that he did not begin work on the fix right when the game released, but he got wind of the issue and created more than half of the preliminary work before the actual release, sprucing it up and pushing it out within that aforementioned twenty-three minute window. He has already released a few updates to his fix, and has been discussing development of it over on his blog. The fix is free, but Durante notes that he won’t turn down a donation, which you can make here. Also, if you’re still experiencing issues, check out the NeoGAF thread, as there are some suggestions available.

Have a happy playing a game released in 2012 with a resolution that makes sense in 2012!