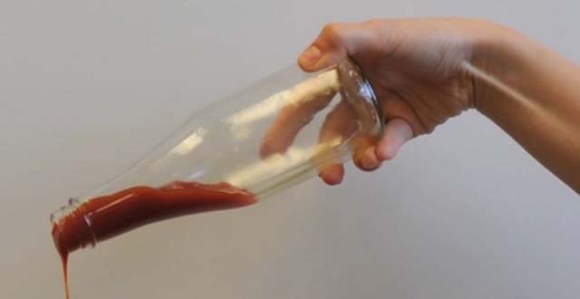 I’m sure at one time or another in your life, you’ve found yourself smacking your hand against a ketchup bottle. Or sticking a knife in the opening. Or stared at the bottle hoping your telekinetic powers would kick in. Whatever your method, Massachusetts Institute of Technology engineers have a new and improved way to get that ketchup out. And all you’ll need to do is tip the bottle.

Seriously, keep reading because there is a video after the jump that will BLOW YOUR MIND!

The big solution to the age-old problem? A specially created coating on the inside of the bottle. Watch it in action.

“MIT doctoral candidate Dave Smith and his team of mechanical engineers and nanotechnology researchers [the Varanasi Research Group] spent the past two months considering, and then solving, the notorious difficulty of pouring thick sauces out of bottles,” writes LiveScience. “They invented LiquiGlide, a slippery coating made of nontoxic, FDA-approved materials that can be applied to the insides of food packaging, such as ketchup and mayonnaise bottles, and honey jars.”

“It’s funny: Everyone is always like, ‘Why bottles? What’s the big deal?’ But then you tell them the market for bottles–just the sauces alone is a $17 billion market,” Smith told Fast CoExist. “And if all those bottles had our coating, we estimate that we could save about one million tons of food from being thrown out every year.”

Of course they neglect to mention that while saving on wasted ketchup stuck inside the bottle, you’ll probably wind up wasting a lot more when you accidentally pour the entire contents on your food.

The team’s biggest challenge was making the solution out of something that would be safe and get FDA approval. “I can’t say what they are, but we’ve patented the hell out of it,” said Smith. LiquiGlide works on all types of packaging too, not just glass. You can find out more by reading the FAQ on the LiquiGlide website.

“We were really interested in–and still are–using this coating for anti-icing, or for preventing clogs that form in oil and gas lines, or for non-wetting applications like, say, on windshields,” said Smith. “Somehow this sparked the idea of putting it in food bottles. It could be great just for its slippery properties. Plus, most of these other applications have a much longer time to market; we realized we could make this coating for bottles that is pretty much ready. I mean, it is ready.”