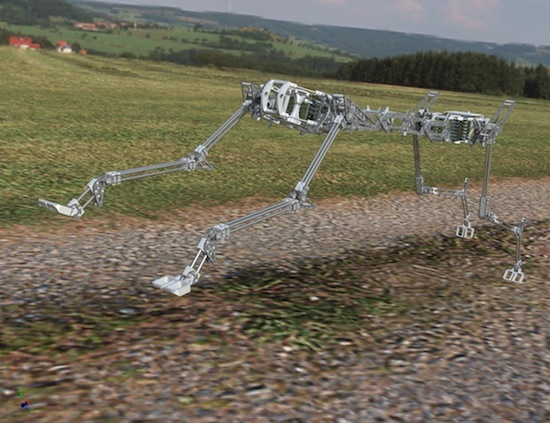 If you want to build a better robot, it makes sense to start with an animal — after all, nature was been building creatures way longer than we’ve been at it, so why not start with something that’s already proven to be a reliable design? Cue Pneupard, a robotic leopard being designed by the robotics team at Osaka University and driven by compressed air. The design is still a prototype right now — you can see it limping along in the video below — but it does sport some pretty impressive artificial muscles, while the compressed air that drives it is a big step forward for a new way of powering the next generation of robots.

Pneupard doesn’t just take its design cues from real-life leopards — it’s movements , rather than being programmed by hand, are based on the movements of a cat walking on a treadmill. This, of course, begs the question of how one makes a cat walk on a treadmill, which is a research paper for another day. The front legs and spine have yet to be completed, which could be why, for now, at least, Pneupard has that ‘walking home from last call’ looks to its gait. The Osaka University team is hopeful that the stride will work itself out in a completed version of the bot, which they aspire to make lighter than competitors — like DARPA’s Cheetah, for example — by ditching hefty battery packs for slimming compressed air canisters.

So, yeah — fair to say this one is a work in progress. Let’s all take the chance to get a chuckle out of it while we can, because these things are going to be a lot less entertaining a couple of decades from now, when the hiss of compressed air is the last thing you hear before being taken down by a robo-leopard.