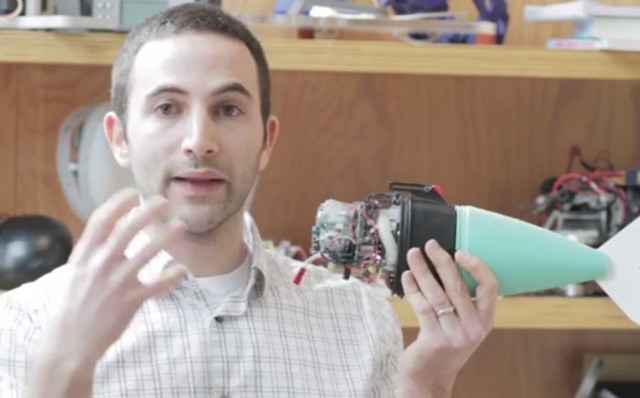 MIT’s new robot fish is the latest in “soft robotics,” which is like regular robotics but more huggable. It also substitutes liquid flowing through cables for traditional means of robotic movement, which has allowed some of the soft robots to move in pretty lifelike ways. That’s what enabled them to build the inevitable star of SyFy’s next monster movie.

That movie would, of course, be about a horde of carnivorous cyborg fish and their undying need for human flesh, and it would apparently be more realistic than Sharknado. Yes, they really built an autonomous, fleshy robot fish—basically a fish terminator. I mean, I guess that’s a lot better than a human terminator, but it’ll probably be nearly impossible to understand its Austrian accent under water.

According to the Daniela Rus, director of MIT’s Computer Science and Artificial Intelligence Laboratory, one of the main benefits that make soft robots so appealing is that they don’t have to be so bogged down by thinking about how to not bump into things and hurt themselves or their environment. (Although, humans are pretty soft, and I still don’t really enjoy running into things.)

That leaves the robots able to choose their movements more efficiently, so they’re probably pretty happy about it, because what do robots love more than efficiency? It also probably leaves their robot brains freer to think about other things like “but do I dream of electric sheep?” and your imminent demise at their hands.

Rus also said, “We’re excited about soft robots for a variety of reasons. As robots penetrate the physical world and start interacting with people more and more, it’s much easier to make robots safe if their bodies are so wonderfully soft that there’s no danger if they whack you.” It also allows for greater precision and range of movement, because the robot isn’t dependent on the limited configurations their hinged joints can achieve.

Here’s the little fish-bot swimming like the real thing:

Currently, the fish can perform 20 to 30 quick “escape maneuvers” to make split-second movements almost as fast as real fish before its power source is depleted. Its creator, Andrew Marchese, who built the aqua-bot in Rus’ lab, explained that’s because the current fish was built to test how it would perform, and that the next hurdle is to give it a little more longevity.

Then, his evil plot to rule the world’s waterways with his robot fish minions will be complete—I’m assuming.