There's microaggressions, and then there's whatever the hell Miranda Hobbes is doing 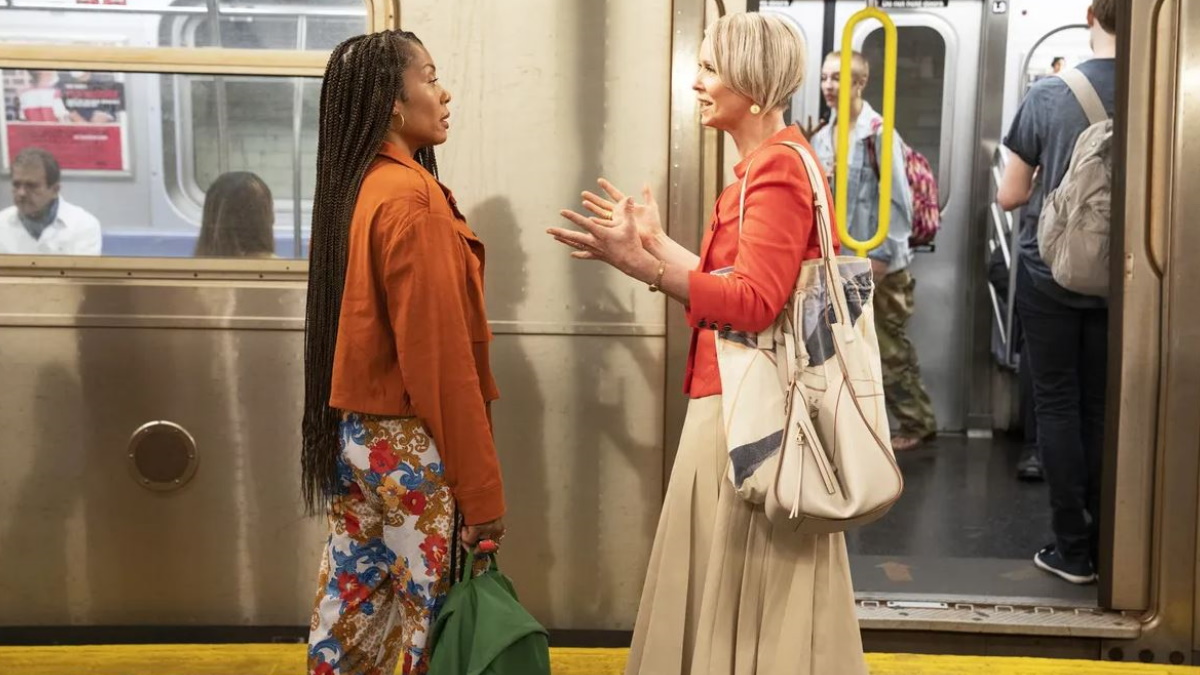 Spoilers for the first two episodes of And Just Like That…

I wasn’t planning on watching the second episode of And Just Like That… at least, not this quickly. Yes, I’m aware that we’re on the third episode right now, but I was planning on either letting the series fade from my memory like the second Sex and the City movie or binging it out of morbid curiosity once it sputtered across the finish line.

Yet here I am, after having a bad time with the first episode, writing about the second episode, all because a coworker said, and I quote, “Miranda saves her professor from a mugger wearing a Chucky mask and worries if she just had a white savior moment.”

There is not enough “it’s 11 AM somewhere” in the WORLD to make that sentence make sense.

We’ve covered a couple of different reasons as to why these first two episodes of And Just Like That… feels like someone released them by mistake, ranging from the piss poor explanation of Samantha’s absence to Big’s death. While those are all sound reasons to put the Manolo Blahniks back in the closet, when I think about the moment that made me pause the episode and scream, “Are you KIDDING ME,” it centers on Miranda Hobbes.

Miranda, who is now so insecure in her decisions that she has to have a drink before doing anything, has decided to go on a good ol’ fashioned “Journey of Wokeness” and has walked away from corporate law so she would no longer “be part of the problem.” Admittedly, this is something that a lot of white people were grappling with in 2020 in the wake of George Floyd. Of course, Black folks pointed out that the problem has been here since America was, well, America, but 2020 was the moment where a lot of white people said, “Oh.”

I don’t mind the fact that Miranda has decided to leave the job she’s held for so many years, though a more fleshed-out explanation showing the process would’ve been nice. We get an explanation (her seeing attornies assisting in the Muslim ban) but, I dunno, walking away from a career you’ve had for so long is an entire ordeal that could’ve been its own multi-episode arc, especially for a character who was so focused on her career for so long.

Instead, she’s already left her career, and we cut straight to what ends up being one of the cringiest interactions I’ve seen on television in a while.

Miranda mistakes her professor, Nya Wallace, for a student. Now, what I thought was going to happen was Miranda assuming she was a student because she looked so young. Miranda had just had an insecure moment about her hair, so it would’ve made sense.

But no. Miranda decides to comment on Nya’s hair, in awe because it looks “so different from the hair in your photo.”

But wait, I say as I replay the scene, through gritted teeth, to make sure I’m getting this right, THERE’S MORE!

Miranda follows this up with an astonishingly awful monologue about how she’s taking the class because Nya is Black. See, Miranda wants to learn from her and be a better white person and why, oh why, am I sitting through this again?!

As a Black woman, I know full and well that not every white person I share space with understands my experiences, but there are some instances that are just so basic that I’m floored that it needs an explanation. I mean … being stunned that a Black woman has a different hairstyle than her university picture? Telling her, to her face, that you’re taking her class because she’s Black?

Is it 1998 again? Because this feels like a story thread from 1998. It feels like that moment in the movies where there’s a bumbling white character who is so outlandishly misguided that white audiences can say, “Thank goodness I’m not as bad as that person.”

Especially when we get to the second episode.

About that Chucky mask…

In the second episode, there’s a moment where Nya has to show her ID to a security guard. Everyone has to show ID, by the way, but as Nya searches for hers Miranda decides that the guard is having one of those discriminatory moments you see being filmed and shared on Instagram. She wonders why the guard is being so insistent with Nya. Could it be because she’s BLACK?

Or is it because the guard has to check everyone’s ID?

Nya finds her ID, shows it to the guard and tells Miranda to stop trying to be so white savior-y. This, my friends, leads to the moment I mentioned with the Chucky mask. Later, when Nya and Miranda are waiting for the train, someone in a Chucky mask tries to steal Nya’s purse.

Why a Chucky mask?

Was there a viral string of Child’s Play-themed muggings going on in New York City that I—… oh wait, there were, back in February.

Regardless, Miranda stops the mugger, then proceeds to say she wasn’t SURE if she should interfere because she didn’t want to be seen as a WHITE SAVIOR.

And now the two are on better terms because the only way Miranda can make a Black friend is to literally come to her rescue when she’s attacked by someone dressed as an iconic horror character.

Why does this have to be part of the story’s attempt at inclusion?

With And Just Like That… trying to have more diversity since the original was so white save for a few love interests (one of which was Miranda’s), I suppose it was inevitable that it would go down this road. A lot of “well-intentioned” attempts at inclusion feel the need to have a racism subplot to show that they hear us, or whatever, I guess.

I promise you could’ve just had a stylish Black lady who also loved a good Cosmo. We can just… BE in the story.

I’m not saying you can’t go there, but what I am saying is you shouldn’t if you’re not equipped to handle the subject matter, and this series? Clearly can’t, but gosh darn it, it sure thinks it can!

Of course, Nya isn’t the only Black woman in the series, nor is she the only person of color, but I’m just not comprehending why such an excruciating racial plot thread has to be here if it’s going to be so cartoonishly bad.

Why do we have to watch Nya deal with this, and furthermore, why is Miranda SO clueless?

Had the creatives behind And Just Like That… really been paying attention to the conversations that were happening, they’d know that there was a push to include us without having us be racial educators. They’d also know that there was a push to have white people take these racial sensitivity steps on their own instead of putting the burden on us. Part of Miranda’s, um, awakening (ugh) should very much be some self-education so she can avoid these dreadful interactions with Black people.

Or they could’ve written her like a person with some common sense.