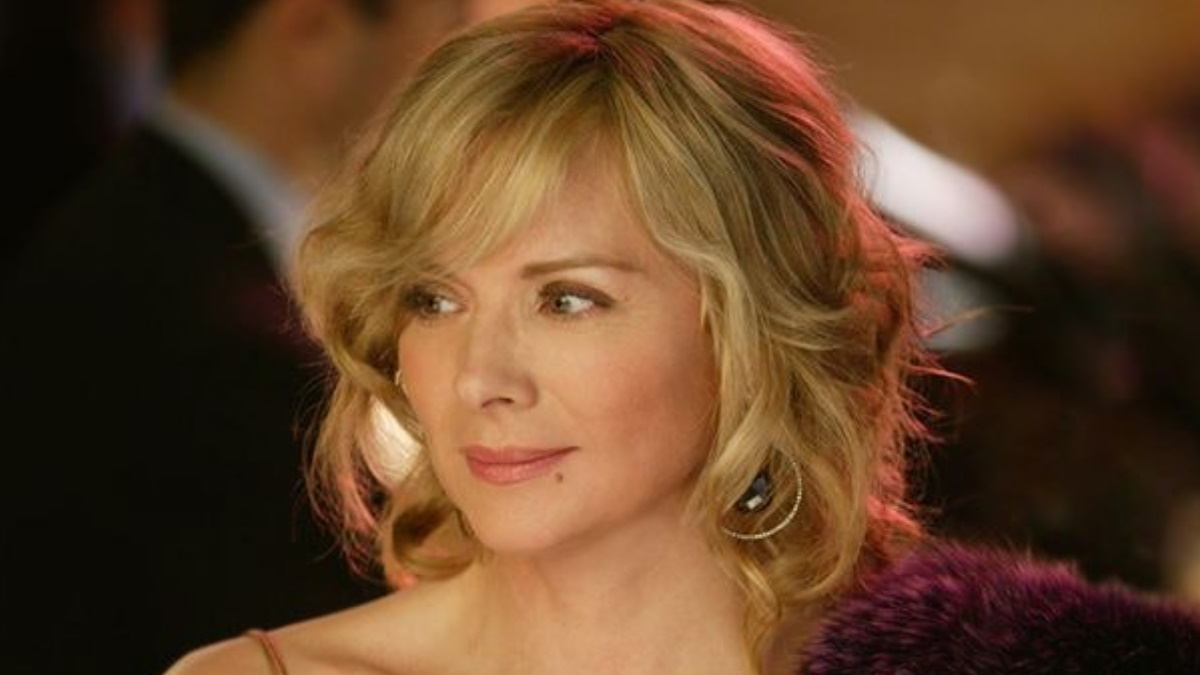 So I sat down to watch the premiere of And Just Like That… which catches us up on the lives of Sex and the City Cosmo besties Carrie Bradshaw (Sarah Jessica Parker), Miranda Hobbes (Cynthia Nixon), and Charlotte York-Goldenblatt (Kristin Davis). Noticeably absent is Samantha Jones (Kim Cattrall), which we all knew was coming because Cattrall has stated, time and time again, that she isn’t interested in returning to the show.

I’m actually not upset that Cattrall said no and greatly respect the fact that she’s choosing herself in all of this, as the things she’s had to say about her time on the show and her feelings about certain cast members don’t sound terribly pleasant. But the show must go on, I suppose, and we were told ahead of time that Samantha’s absence from the series wouldn’t be something awful like her being killed off.

Instead, it would be a falling out between Samantha and the girls. As hard as that may have been to accept since these women have made “soulmate” comparisons in the original, such rifts do happen between lifelong friends. The question I had, though, was what the rift between the four was, and we get the answer fairly early in the premiere.

And just like that, it feels … incredibly lazy, and damn near petty.

Spoilers for episodes 1 and 2 of And Just Like That…

After the odd choice of words from Charlotte about Samantha being “no longer with us” (especially since this series takes place post-COVID, lol, oh how I wish to be there), we find out that she’s moved to London. If series actually knew how to put respect on Samantha Jones’ name, she’d be in London because she got the job opportunity of a lifetime and couldn’t pass it up.

Instead, it turns out that she and Carrie had a falling out about work. Apparently, Carrie dropped her as a publicist due to how “the book business is now.” According to Carrie, this led to Samantha “firing her as a friend.”

What, exactly, does Carrie mean when she says “the way the book business is now,” I wonder. Does she mean because of the transitions we all had to make due to COVID? Is it the rise of things like ebooks and audiobooks? Why wouldn’t you need a publicist to help you out with anything right now? Are you telling me Samantha wouldn’t have come up with a killer online campaign for Carrie when she couldn’t do in-person events anymore?

Or could Carrie not afford to pay her due to a loss in revenue which, if that’s the case, Samantha would’ve understood, I’m sure. Hell, in the original series, when Carrie said she couldn’t afford her, Samantha said she’d be her publicist for “two martinis and a lunch” so … what is the problem, here?

I know I’m grasping at straws here, but it’s just such a vague comment on why she and Samantha fought, especially if you’re trying to convince me that this led her to leave the country.

Also, bold of you to assume that Samantha Jones would leave just because she had a fight with Carrie, I don’t care how “embarrassed” Miranda says she was.

Furthermore, it’s even more puzzling to act like Samantha would end her friendship with EVERYONE because of it.

Put more respect on Samantha Jones. She was the most understanding friend in that group and would never go ghost like that. Lazy-ass writers. #AndJustLikeThat

Samantha would do anything for her friends idk how much time passes she would never ever ghost her friends. Lazy unrealistic plot ever. Anyways Samantha Jones Supremacy#AndJustLikeThat pic.twitter.com/tWfHOzlHtZ

I’m sorry but there is no way Samantha Jones would ghost her friends #AndJustLikeThat pic.twitter.com/hh1DsYNPpM

Samantha Jones who once told Carrie she won’t judge her for sleeping with a married man because it’s not her style suddenly up and dropped her three best friends because she lost out on a client? Pathetic #AndJustLikeThat #satc

If she’s mad at Carrie over something work-related, sure, that’s happened before, but to say she cut ties with Miranda and Charlotte, too? Then left?? The country??? It’s also pretty disrespectful to have this “I thought I was more than an ATM to her” line from a woman who, once upon a time, shamed a friend for not being willing to loan her money when she was in a financial bind.

You know who offered to help Carrie when she got in a financial hole, no questions asked? Samantha Jones.

Basically, their professional relationship is not going to be the thing that separates these women, or if it is, I’m gonna need more than a bitter “ATM” comment from Carrie Bradshaw of all people.

It really just feels like the show is trying to send a message to Cattrall, who refuses to give this series the time of day. I feel like the creators keep trying to figure out why that is when Cattrall has been pretty transparent about it. It’s not like she’s been hiding how she feels, she’s been very blunt, especially when it comes to Sarah Jessica Parker. In 2018, for example, when Cattrall’s younger brother passed away and Parker tried to send her condolences, Cattrall straight up told her to back off. “Your continuous reaching out is a painful reminder of how cruel you really were then and now,” Cattrall wrote on Instagram. “Let me make this VERY clear. (If I haven’t already) You are not my family. You are not my friend.”

Yet every time you bring the situation up to Parker, she acts like there is no animosity. “I’d just like to remind everybody that there is no catfight,” she told Vulture. “I have never uttered an unkind, unsupportive, unfriendly word, so I would love to redefine it. I also want to remind everybody that there were four women on the set and I spent equal time with all of them, so this was not a set with two women who didn’t get along. I’ve always held Kim’s work in high regard and [was] always appreciative of her contributions.”

This “Samantha left” plot in And Just Like That… feels like another moment where Parker and the creators just aren’t listening to the writing that Cattrall has put on the wall, and instead of respecting it, they’re writing in a mischaracterized conflict with this weak “see she still cares” moment where Samantha sends flowers to Big’s funeral.

There ain’t no way Samantha Jones isn’t getting on the next flight to New York when she hears about Big’s death.

There is no universe where Samantha would not show up immediately at the top of episode 2. It’s impossible to watch a show predicated on a reality that doesn’t exist.

I’m not sure where the rest of the series is going to go from here, but I feel like anything they try to do with Samantha is just disingenuous, at this point. I’m not interested in seeing Carrie’s POV on the fallout with Samantha and would much rather imagine Samantha living her best life in London.

And honestly? Kudos to Kim Cattrall for not going back.