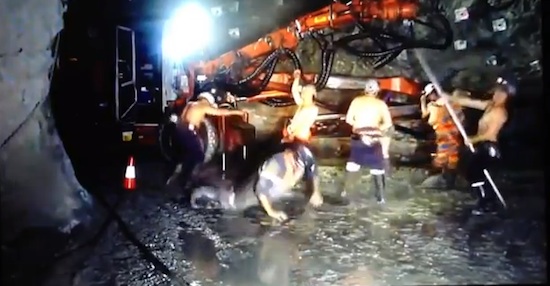 As many as 15 employees at Western Australia’s Agnew Gold Mine have lost their jobs after producing a video showing the world exactly what the Harlem Shake looks like underground — pretty much exactly like it does everywhere else, but with way worse lighting. Our hearts go out to the workers, because losing a job is always pretty terrible. On the plus side, though, maybe now they can get new jobs that are not in mines, as working in a mine is also pretty terrible? Check out the video below and let us know if you think dancing topless in a gold mine should be a fireable offense.

According to one miner interviewed by a West Australian newspaper, the eight miners who participated in the filming of the video and another seven were not only fired from their jobs by Barminco, the company which runs the mine, but banned for life from all future Barminco projects. And while we get that safety concerns are at their height in a mine, man, that still seems like a bit of an overreaction — especially since the only piece of equipment the dancing miners seem to have removed are their shirts, which are not widely known for their protective value in the event of a mine collapse.

If you want to show your support for the fired miners, you can do so on a Facebook page set up to encourage Barminco to give them their jobs back.