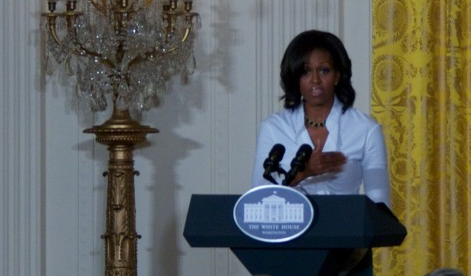 This week, First Lady Michelle Obama held a press conference at the White House, along with the National Science Foundation, to discuss the creation of its new Career-Life Balance Initiative. It is being aimed at women working in STEM fields — science, technology, engineering, and mathematics — and will tackle the issues faced by those who choose to have families while retaining their careers. Obama said: “If we’re going to out-innovate and out-educate the rest of the world, then we have to open doors to everyone … And that means clearing hurdles for women and girls as they navigate careers in science, technology, engineering and math.”

The National Science Foundation is well aware of the sacrifices that women in STEM fields have to make that men (for some reason) do not. On Geek Mom, Helene McLaughlin discusses how she had to put her career in astrophysics on hold to care for her young sons. However, while she has no regrets about her own choice, she points out that unlike other women in STEM fields, she had different goals for her career and was not trying to achieve tenure.

Those that I saw trying to balance a family and their research were always having to give up time with their family in order to meet deadlines or in order to compete with their childless peers. Its a life that is extremely hard to keep up with and is one of the main reasons that there are so few women who make it into the upper echelon of the scientific world.

While some accounts differ, having to choose between family and career has certainly caused many women to give up one for the other, and as a result, less women stay to pursue careers in STEM fields. But now, the NSF Career-Life Balance Initiative — which will be implemented over the course of 10 years — seeks to knock down these “hurdles,” to use Mrs. Obama’s wording, to make it easier for women to retain their careers while raising the families they’d always wanted to raise.

Among the new policies are:

It should be noted that none of these policies made specific mention of “maternity leave,” but did cite “parental medical leave” and “accommodations for dual-career couples” in the brochure. The policies aim to encourage gender equity and making sure that gender discrimination won’t be tolerated (in accordance with Title IX). So, this is actually recognizing parenting as the job of mothers and fathers — not just mothers. Parents. And that most likely includes same-sex couples as well. (At the very least, that can be read as “the policies are left open enough to be interpreted that way.”)

The NSF will be putting focus on helping women in specific areas, such as academia, graduate students, and post-doctoral fellows. More details about the initiative can be read on the official site.