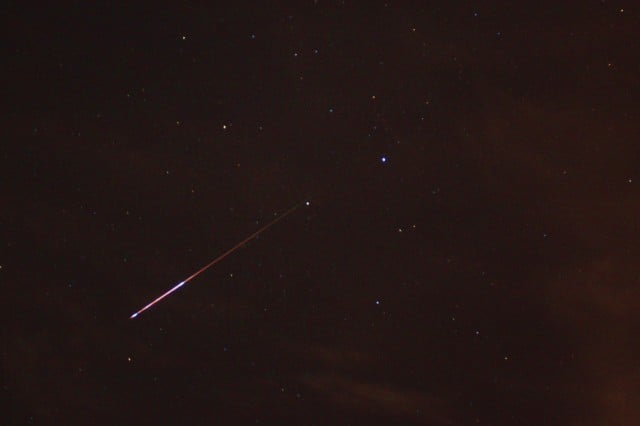 The Perseid meteor shower will peak August 11 and 12, but while you’re wishing on a shooting star, do you ever wonder what happens to the remains of the meteors that are burning up due to intense friction in Earth’s atmosphere? No? What, that’s too unromantic a thought? Sorry, but science has some answers for you.

If you’re worried about all the junk we’re leaving in space with each rocket launch, rest assured that space is giving back. According to NASA’s Karen Fox, 10 to 40 tons of meteoric dust enter our atmosphere every day. When Earth’s orbit passes through fields of debris left behind by comets, we get meteor showers that streak across the night sky (also the day sky, we just can’t see them). In the case of the Perseids, it’s the trail of Comet Swift-Tuttle.

Radar systems around the world track particles deposited in the atmosphere by meteoroids. (If you’re confused, meteoroids are the pieces of space debris themselves, meteors refer to what we call “shooting stars” — the trails of particles we see in the sky, and meteorites are meteoroids that survive intact through the atmosphere and hit the ground.)  Many of these particles are metals such as magnesium, sodium, or calcium, making them easy to follow, especially in the wake of a meteor shower charged particles.

What we learn by tracking the remains of meteoroids by radar is that once reduced to dust, the particles from meteor showers don’t just sink to the ground; they drift and circulate in the atmosphere in established patterns due to wind and other conditions. Atmospheric dust plays an important role in cloud formation, giving loose water vapor something to cling to. Metallic dust from meteors often remains in the mesosphere, higher than where clouds normally form, but it drifts to polar regions and becomes the basis for “night-shining” noctilucent clouds that are visible in the summer at twilight.

Another facet of tracking these particles involves using lasers to highlight particles of sodium from meteor dust. This makes it possible to follow the paths of these dust particles all around the world using the sodium as a tracer. And if you thought the idea that science takes away the majesty away of nature was ridiculous, wait until you learn that scientists literally remove the twinkle from stars in certain telescopes with an adaptive optics technique, based on shining lasers to excite sodium atoms to use them as artificial reference stars. Sure it helps them observe the skies better, but it comes at the cost of losing that childlike wonder.

So when you watch the meteor shower (if you’re lucky enough to be in a place with good weather and visibility conditions), don’t worry about where all that stuff is going to land. Unless you’re really lucky and a meteorite crashes near you, in which case the proper course of action is to forge it into a mighty weapon to smite evil. Have a good weekend.

(via NASA, image by Jared Tennant via Wikimedia Commons)