Coming Soon to a Southern Hemisphere Near You: Best View of Mercury in 2013 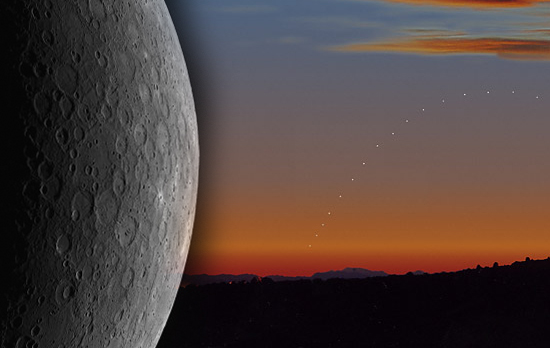 Mercury was that speedy, virile, caduceus-wielding Roman god who ran about doing all the foot work for the bigger gods. It’s fitting, then, that the littlest planet in our Solar System — that zips around the Sun closer than any other — is named after him, too. Its orbit is only 88 days, and this week, Mercury will streak through our dusk and dawn skies in its greatest elongation of 2013. Us folks in the Northern Hemisphere can see it at dawn if we know where to look, but folks in the Southern Hemisphere will have an even better show.

Elongation is the angle between the Sun and a planet, with Earth as the reference point, because somehow we still think we’re the center of the universe. And because Mercury is back-lit by the Sun, and interior to us, we can really only see it low in the sky at dawn or dusk.

As we’re now near the March equinox, the angle of Mercury’s ecliptic — the circle formed by the intersection of Earth’s orbit with the celestial sphere — means that from a northerner’s point of view, Mercury will be high in the western dusk and low in the eastern dawn. For southerners, it’s the opposite.

In short, Mercury will be hard to see for us on the top half of the planet. If, however, you plan on making a trip to, say, Argentina or Australia, like immediately, then it’s worth looking out for that fleeting Roman god with your own eyes.