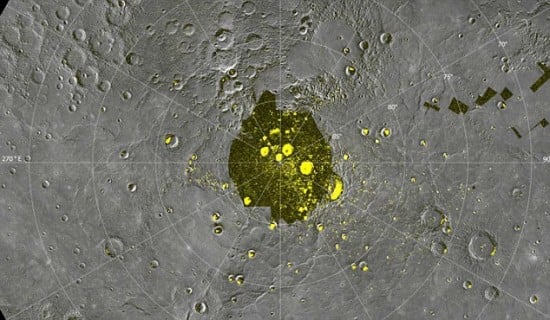 Though Mercury is generally thought of as an inhospitable, flaming ball of rock due to its close distance to the Sun, its poles are permanently cast in shadow. In the past, work has shown that areas near Mercury’s poles reflect radar, which is something ice does. Now, it turns out, the Messenger probe has found that the radar patches near the shadowy poles actually line up with craters that are covered in shadow, which would make a perfect home for water-ice.

The patches on Mercury bright with radar were detected back in the ’90s, but until recently, the location of the patches were not known, due to a lack of imagery of Mercury’s surface. Dr. Nancy Chabot of Johns Hopkins University Applied Physics Laboratory and a team of researchers simply superimposed the older imagery of the radar-bright areas onto the new imagery of the surface, and found that the radar areas are located in areas of permanent shadow. Both the north and south poles have similar overlap of radar-bright spots in areas of permanent shadow, which, as Chabot said, is “consistent with the water-ice hypothesis.”

However, being consistent with a hypothesis does not mean it is proof. Chabot points out that if water-ice were hiding in craters cast in shadow, it would need to be covered by around 10 to 20 centimeters of insulating debris in order to keep it stable. Though water-ice is a hopeful and interesting interpretation of the radar-bright areas, Maria Zuber of the Massachusetts Institute of Technology says that those areas could also be the result of sulfur, but does note that water-ice seems likely. She also notes that she feels the question of these radar-bright areas being water-ice can be definitively answered, rather than posing a likely theory and rolling with that.

Along with the data and subsequent research regarding the possible water-ice on Mercury, researchers also found that Mercury had been geologically active for a long time, as data showed that impact craters on the surface were geologically distorted after they had already formed.

One can only hope there are little Mercury aliens hiding in the shadowed, possibly ice-filled craters.

(via BBC, image via Daily Mail)