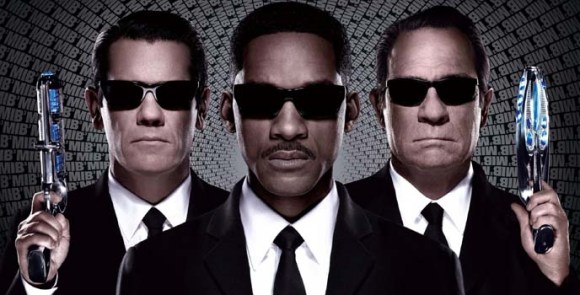 It looks like The Avengers have officially left for some extended shawarma time — Men in Black 3 took over the top of the box office this Memorial Day weekend. As much as we would have liked to see our Marvel heroes stay at Number One and reign triumphant over moviegoers for the rest of eternity, this was obviously going to happen at some point. I’m pretty sure our lives will remain exactly as they were, and hey, it’s about time another movie made some money as we officially head into the summer blockbuster season. Deep breaths, deep breaths…

After breaking box office records in its opening weekend, The Avengers spent the next couple of weeks burying other brave new releases (like Dark Shadows and the critical, um, darling, Battleship) and easily holding on to the top spot. And then it made — literally — a billion dollars, and it looked pretty unstoppable. But now, as commercials urge us all to see The Avengers again (which this writer might just do tonight, for a third time), the third installment of the Men in Black franchise zoomed in and flashy-thinged everyone, making $18 million on Friday night alone.

However, while everyone is moving on from The Avengers in its fourth week, the numbers for MiB3 are not exactly as big as Hollywood insiders were expecting. Because, remember, this is a world in which $10 million is pocket change. Globally, MiB3 has grossed a good $202 million, but domestically, forecasts are only predicting about $70 million; earlier forecasts were hoping for more like $80 million. The amount it made is certainly nothing to sneeze at, but it definitely won’t be enough to overtake the final numbers being brought in by The Avengers (which still brought in $37 million this weekend). Keep in mind, these forecasts include the extra day for Memorial Day weekend, too, an advantage that a lot of movies don’t normally have.

MiB3 will likely break even (it cost $230 million to make) and it’s getting a pretty decent response from fans and critics. It was also a bit of a gamble to begin with, considering this is Will Smith‘s first movie since the somewhat off-putting Seven Pounds (and Hancock) and we haven’t really heard from the Men in Black in a solid 10 years. To say nothing of how this movie seemed to materialize out of thin air without a script. But one look at Josh Brolin‘s impression of Tommy Lee Jones was probably enough for some to be, at the very least, curious.

Next up: Disney Pixar‘s Brave.