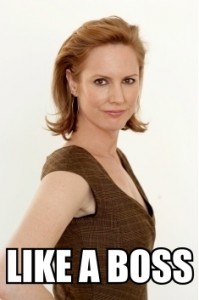 Melissa Rosenberg has beaten screenwriter Linda Woolverton for the title of highest-grossing woman screenwriter of all time. While Woolverton’s credits include Tim Burton‘s Alice in Wonderland, The Lion King, Beauty and the Beast, and Homeward Bound, Rosenberg has likely edged out her competition with her one film series: Twilight. But it’s not just Twilight, although that’s got the lion’s share of the credit ($2.56 billion worth of credit, according to The Hollywood Reporter). Rosenberg also has significant TV credits under her belt.

Credits like the starting head writer of Dexter and the woman behind the Birds of Prey television series from back in the ’00s. This is pretty cool news, since making that kind of money allows a writer to pick and choose their projects. Currently, what Rosenberg has chosen is AKA Jessica Jones, one of Marvel Studio’s first television projects, about the investigations of former-superhero-now-private-detective Jessica Jones, and set firmly in the Marvel Universe and the canon of the Marvel Cinematic Universe.

That $2.56 billion, however is less than half of the highest-grossing male screenwriter in Hollywood, Steve Kloves, who’s raked in the cash for seven of the eight Harry Potter movies, and James Cameron, whose writing has earned him $6 billion. The Hollywood Reporter also notes that Rosenberg might not hold the title for long: Beauty and the Beast is due back in theaters as a 3-D rerelease soon. But she might just grab it back shortly after, with Twilight: Breaking Dawn, Part 2.

(The Hollywood Reporter via Movie News.)