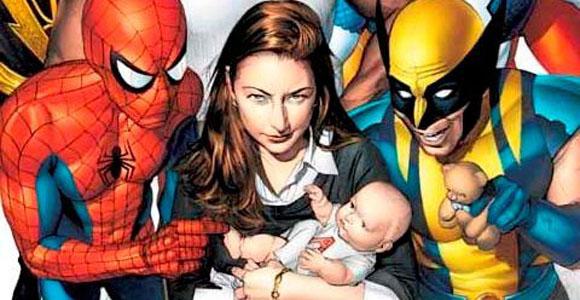 With Marvel lacking a bit when it comes to their female characters lately (they’ve just cancelled their last two female solo titles), it’s nice to see that not only are one of their heroines getting her own TV show but it won’t ignore the rest of the Marvel Universe and pretend to be about something else. AKA Jessica Jones is the show and writer Melissa Rosenberg (the Twilight films) spoke recently about which Marvel characters she hopes to utilize in the series.

Just last week, Rosenberg confirmed that Marvel characters Carol Danvers (Ms. Marvel) and Luke Cage (Power Man) would be in AKA Jessica Jones. The latter is not suprising considering he’s been in a relationship with Jones, fathered her child and then became her husband, but Rosenberg now has even more details.

She told HitFlix the series would absolutely take place in the larger “cinematic” Marvel Universe that has been established by recent films but that they can’t use everything. “It’s very tricky navigation there. You can’t mention one guy because Fox has the rights to that guy and Universal has the rights to the other one.  There are a lot of boundaries on who you can and can’t use,” she said. “I had Jessica Jones and Luke Cage and Carol Danvers [for the pilot script].  Basically, I wanted those three guys — then I would have a series. Everyone else we can be digging into lesser known characters or taking known characters and renaming them.”

Even if we won’t be seeing him on the show, Tony Stark and Stark Industries are mentioned in the script, according to Rosenberg. “As we go along things will alter in terms of what is made available to us, but we’re definitely in that universe. We are in no way denying that that universe exists, ” she said. “And as much as I can I’m going to pull everything in from there that I can use.”

Based on Brian Michael Bendis‘ comic series Alias, AKA Jessica Jones will revolve around the character who gave up her life as the superhero Jewel in order  to open a private detective agency.

And for the record, Rosenberg doesn’t think the failed Wonder Woman pilot would affect the chances of AKA Jessica Jones getting picked up by ABC. “Frankly, Jessica is so much darker than Wonder Woman,  If anything that would be the issue,” she said. “It’s fairly edgy and gritty than even the comic book.” Still no word though on whether we’ll see anyone in costume.

Now she says, they are just waiting to see what happens with the upcoming season on ABC. “It fell between the cracks of the seasons and, hopefully, this will be the one,” she said.