On NBC’s Megyn Kelly TODAY, the former Fox News host took aim at serial harasser Bill O’Reilly and blasted her old network for its decades-long complicity. In what The Washington Post calls “an extraordinary monologue,” Kelly is equal parts determined, furious, and impassioned as she details the failings of Fox News’ toxic culture.

Kelly’s monologue came in response to Bill O’Reilly’s specious claim that no one had complained about him during his Fox News tenure. This followed a weekend where the New York Times published an explosive article documenting how O’Reilly had settled a sexual harassment lawsuit with a former network analyst for $32 million dollars.

According to the Times, the woman’s complaints “included allegations of repeated harassment, a nonconsensual sexual relationship and the sending of gay pornography and other sexually explicit material to her.” Despite this settlement—indeed, because of it—Fox News then went on to renew O’Reilly’s contract in February for four more years, at $25 million a year. The $32 million case was at least the sixth harassment case that O’Reilly had settled.

Imagine the behavior he was so desperate to keep under wraps that he paid $32 million dollars to do so. Just. Imagine.

Kelly wants to set the record straight where past complaints and O’Reilly are concerned, at least as far as she can testify: “O’Reilly’s suggestion that no one ever complained about his behavior is false. I know because I complained.”

Then she shares excerpts from the email she says she sent to Fox’s co-presidents Bill Shine and Jack Abernethy, following public comments made by O’Reilly that he wasn’t “interested” in addressing the topic of sexual harassment.

“I’m sharing now because I think it speaks volumes,” Kelly says of the contents of her email and its reception, “about powerful men and the roadblocks one can face in taking them on.” Kelly’s email read, in part: 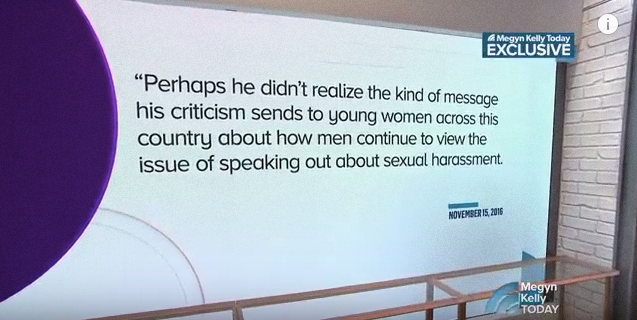 And then Kelly delivered the portion of the email that I truly wish was the death-blow to O’Reilly’s career, and should be, in a just world:

In her spoken monologue, Kelly’s spoken words were even more precise and cutting:

Perhaps he didn’t realize his exact attitude of shaming women into shutting the hell up about harassment on grounds that it will disgrace the company is in part how Fox News got into the decade-long [Roger] Ailes mess to begin with. Perhaps it’s his own history of harassment of women which has, as you both know, resulted in payouts to more than one woman, including recently, that blinded him to the folly of saying anything other than, ‘I am just so sorry for the women of this company, who never should have had to go through that.’

Kelly’s email produced exactly zero repercussions for O’Reilly at Fox News at the time. He was permitted to go on the air that same night and disparage people who lodged complaints against their workplaces to a massive TV audience. What happened with O’Reilly is exactly why women are hesitant to report harassment, assault, and even simple concerns about behavior. When there is so clearly no accountability for powerful men, why should these women risk their careers and be thrust into an unforgiving spotlight because of what happened to them?

“This is not unique to Fox News,” Kelly says. “Women everywhere are used to being dismissed, ignored, or attacked, when raising complaints about men in authority positions. They stay silent so often out of fear. Fear of ending their career. Fear of lawyers, yes. And often fear of public shaming, including through the media.”

I’ll admit that I’ve never been a fan of Kelly’s. In my head, she was synonymous with Fox News, and Fox News, President Trump’s network of choice, helps push the dangerous and divisive narratives that enabled Trump in the first place. By working at Fox News for more than a decade, seeing her star rise there, Kelly was benefitting from Fox News’ twisted take on the news and twisted company culture. So it’s at least refreshing to see that she’s burning her old bridges down. I feel like an excellent way for Kelly to do penance for her Fox News time would be to continue to speak about the realities of what she witnessed there with this much passion and clearly articulated outrage.

Kelly has struggled to find her footing on her NBC morning show, which was pitched as light-hearted and rather fluffy and hasn’t seemed like a good fit. But I was impressed with her monologue today, which was deeply felt, her incandescent anger at what she experienced and what women continue to experience everywhere suddenly transforming her into a firebrand. It’s clear she’s far more in her element speaking truth to sexist power than dancing on-screen. If I were NBC, I would want this fiery, unapologetic, and fierce Megan Kelly. We are at an important cultural crossroads, and female hosts shouldn’t have to be cutesy and chipper, even if it is the morning. Today Kelly proved that.

“This must stop,” she says, using her platform to speak the words that many of us have been whispering for a long time. “The abuse of women, the shaming of them, the threatening, the retaliation, the silencing of them after the fact, it has to stop.”