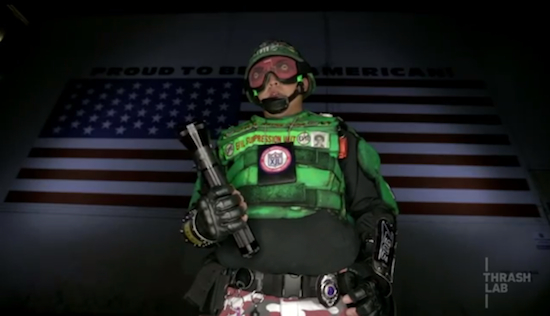 It takes a dedicated nerd to dress up as a super hero or heroine of their own design and walk the streets without fear of ridicule. But it takes a dedicated nerd with a serious pair of cojones to do exactly that and take to the streets administering their own brand of justice. In the Subculture Club documentary The Subculture of Superheroes, the cameras follow members of the San Diego-based Xtreme Justice League on their mission to make the city a safer place for all its citizens. They may not have the equipment and flair of the Avengers — hey, not every hero can hope to be bankrolled by Tony Stark — but at the end of the day, they do what they can to wipe the scum off the streets — figuratively and literally, since community clean-up falls under their heroic purview.

Compared to the other masked vigilantes you always see making the very last story of the 10 o’ clock news — mostly because they’ve been beaten senseless with their own plastic weapons by teenage gangbangers — the Xtreme Justice League is actually getting stuff done, even going as far as setting foot in bad neighborhoods to keep the peace, rather than maintaining a heavily monitored perimeter within ten feet of their parents’ house.