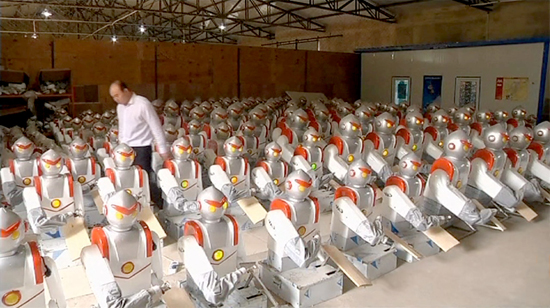 Chef Cui is a noodle-slicing robot developed by Cui Runguan, a Chinese restaurateur, that is now being mass-produced and sold in China. The robot only has the single task of slicing noodles into a boiling pot of water, though it also lights up for no apparent functional reason. Probably because it’s a robot. With rising labor costs, it can actually be cheaper for restaurants to purchase a Chef Cui rather than hire on an additional worker.

The robots cost around $2,000, while the average worker would make about $4,700 a year working at a Chinese noodle shop. Even if the owner had to buy two Chef Cuis a year, they’d still be paying out less than they would if they had to hire an extra person to slice noodles by hand. There’s also the added benefit that the machine-sliced noodles are mostly uniform while human-sliced noodles are more irregular.

The Chef Cui was first revealed in March of 2011, but has since gone on to actually be used in noodle shops in China. There’s a demand for the robot chefs, as 3,000 of them have been sold since production started. There’s something slightly ominous about a noodle-slicing robot that’s hard to put a finger on. Next thing you know, they’ll be rolling our burritos.
(Eater National via reddit)