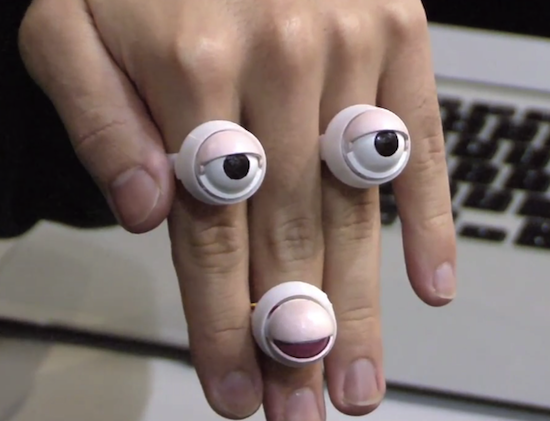 You have to hand it to these Japanese universities: There is no end to the strange, and perhaps imaginative, things they are willing to research. The latest comes from Keio University, home of the poster you can make out with, which has developed a set of robotic eyes and mouth fitted to rings. The researchers involved go on and on about this being a brekthrough form of communication, ignoring the obvious truth that they wan to turn your hand into a Furby.

Like the aforementioned make out poster, the mechanics behind the robotic rings are remarkably straightforward. Each ring has a wirelessly controlled electromagnet, which the user triggers to make the eyes and mouth open and close. The researchers say that they want to work toward making the rings behave “more like a character,” which presumably means they would function autonomously.

Masayasu Ogata, who is involved in the research, discussed the reasoning behind this form of human-robot interaction thusly:

Until now, robots have usually communicated with people from a distance. That’s also true of pet robots like AIBO, and androids. Until now, robots haven’t been attached to the human body. We’ve designed this ring-shaped robot as an entertaining communication device, like an accessory that’s fun to wear, to help wearable robots progress beyond the research stage.

While these would probably be a major boon to puppeteers, discussing the future product as an “accessory” has some troubling implications. Remember those Tamagotchis? Remember how they would squawk and beg for attention? Now imagine your hand doing that. Imagine your hand demanding to played with, fed, and to interact with other creepy sentient hands.

The researchers are hoping to continue work on their hand-faces, planning to eventually incorporate more interactive elements like motion sensing and the like. Meanwhile, I’ll be preparing for the day when we all become slaves to our hands.