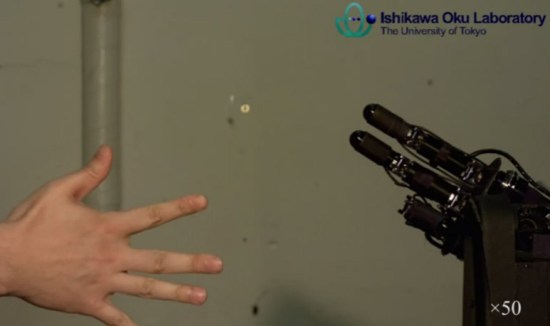 In a monumental act of hubris, someone has created a robot that can defeat humans in Rock-Paper-Scissors 100% of the time. You might expect that years of observational study and an enormous, highly accurate predictive algorithm were involved in this amazing feat. You’d be wrong. The robot is a cheater; a cheater with a high-speed camera and fast reflexes.

The robot’s creators at Ishikawa Oku Laboratory explain how it works:

Though extremely simple, the execution is so effective that the robot has a 100% win rate. Finding a way to actually beat the robot would be difficult, as the camera is probably fast enough to detect a mid-choice fake out (i.e., transitioning from one choice to another in midst of choosing; rock becoming paper, or something). Our only hope is to find a way to cheat better than the robot — maybe by unplugging it when no one is looking.

The robot’s creators say that this is a useful demonstration in robot-human interaction, and may one day help remove any latency between communicating with machines. However, I think it’s far more likely that the researchers just wanted to create something truly infuriating.