Medieval Times, Dinner And Tournament, Is Getting Turned Into A Hollywood Movie 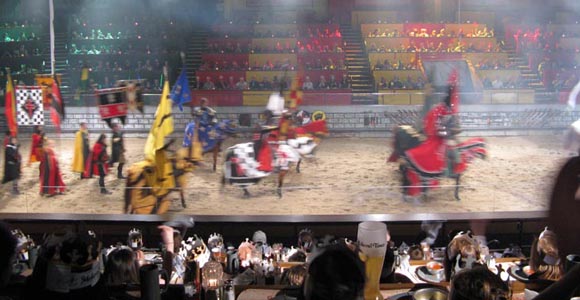 Medieval Times – you know, that place you went on field trips to and had to eat with your hands – is about to get the Hollywood treatment. In other news, Subway will be getting a sitcom this Fall…

Ok, thankfully I’m joking about Subway but this Medieval Times thing is legit. Now before I continue, let me briefly break down what Medieval Times actually is for those of you who may not be familiar.

Medieval Times is a restaurant chain with nine locations around the United States and Canada. You purchase a ticket for dinner and a show and are treated to a cheesy, Ren Faire-inspired take on a medieval atmosphere. The employees are meant to stay in character, you’re meant to eat with your hands, and you cheer on a brightly colored knight who corresponds with your brightly colored section in the theater while actors perform some drama. Of course there’s tons of souvenirs to purchase, overpriced group pictures, and even a chance to get “knighted,” again, for a price. I grew up with one not too far from my house so it actually became part of my childhood and certainly fed into my already nerdy personality.

So how and/or why is this getting made into a movie and what will it entail?

“The production companies Benderspink and Broken Road have teamed to make a rights deal with the Middle Ages-centric Medieval Times. Their aim is to take the branded dinner and tournament venue and get medieval on turning it into a feature film property,” writes Deadline.

Now, keep in mind, pretty much any time Medieval Times has been featured in a film, it’s been to make fun of the whole idea. Remember Garden State or The Cable Guy? We don’t have any information of what they plan to do with it once it’s turned into a film property but I wouldn’t be surprised if that’s the direction they took. Can you think of another plausible way this could be turned into a movie? Let us not forget Battleship.

(via Geekosystem, image via BridgeAndTunnelClub)