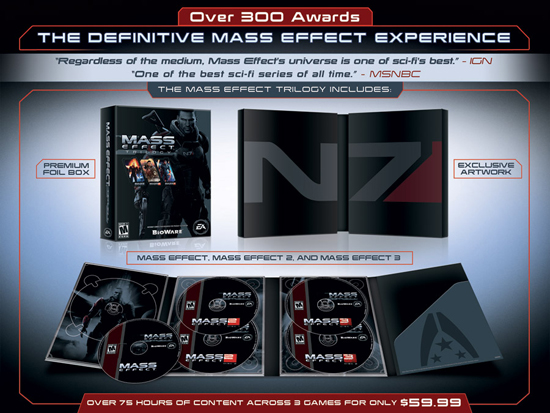 Prepare for the Internet backlash, folks: BioWare‘s announced that Mass Effect Trilogy, a compilation of the three Mass Effect games, will be hitting store shelves on November 6th. At least, it will for PC and Xbox 360. The PlayStation 3 version doesn’t have a date yet, presumably because the original game was an Xbox 360 exclusive. The ending of the third game was rather divisive, so a second release is liable to only stir up hurt feelings and trolls.

Also, the release date is rather amusing. Why is November 6th amusing, you might ask? Well, that’s because the following day is November 7th, as in N7, as in the designation assigned to Shepard in the game. BioWare sure does love to play with words.

Here’s a list of bullet points that the site implies the trilogy includes:

Notice that it cleverly avoids mentioning whether this compilation includes the DLC as well. Bummer.