Users are losers, but only if they get caught, apparently. 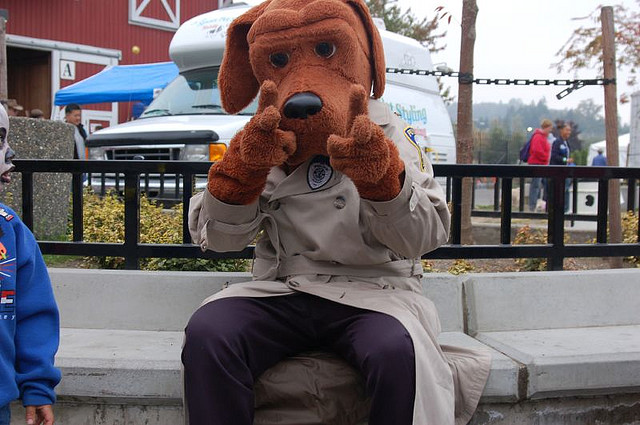 Kids of the eighties and nineties, a little bit of our innocence died this week. John R. Morales, the actor who played everyone’s favorite crime-fighting blood hound, turned out to be a grenade-launching hypocrite who’s going to jail for a long, long time.

This week Morales was sentenced this week to 16 years in prison for a bizarre arrest in Galveston, Texas from 2011. He’d been charged for illegal possession of “1,000 marijuana plants, 27 weapons – including a grenade launcher, and 9,000 rounds of ammunition.” Wow. if you’re going to have a public fall from grace, go big or go home I guess. But a grenade launcher? That’s so wacky, it doesn’t even have a McGruff PSA.

US Judge Vanessa Gilmore, upon delivering McGruff/Morales’ sentence, confirmed what the bizarre charges seem to indicate: “Everything I read about you makes you seem like a scary person.”

Even TIME is alarmed by the downfall of the trench-coat wearing sleuth, pointing out that, ironically, it was a dog that lead to Morales’ capture — a drug-sniffing canine alerted police to his enormous stash of marijuana and, oh yeah, his grenade launcher.

Perhaps McGruff was just dissatisfied with law enforcement in Texas and wanted to take matters into his own paws?

Regardless of what excuse Morales had for his grow-op/armory, it’s clear that we can no longer trust the actors who wear the suits of our national heroes. (I’m looking at you, pervy Times Square Spider-man. Sling your web at me one more time, I dare you).

America’s children need a new hero to help them take a bite out of crime. Here’s a PSA from back in the day, as a reminder of what McGruff one stood for.

Take a bite out of crime