I am emotionally compromised. 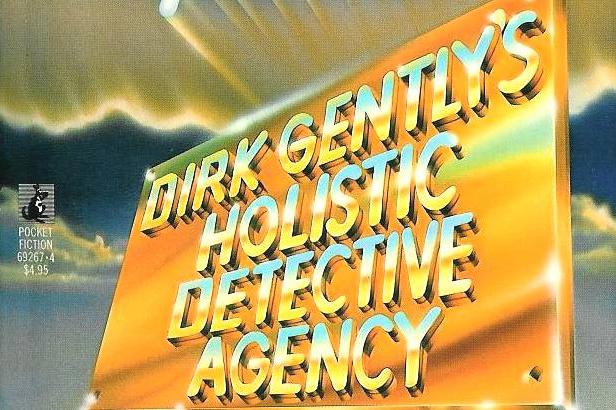 Did someone say “new Douglas Adams adaptation”? No, I’m not crying. I’m completely over Adams’ death at the far-too-young age of 49. I’M FINE.

IDW Entertainment has partnered with Ideate Media to produce a TV version of Douglas Adams’ pair of Dirk Gently books, Dirk Gently’s Holistic Detective Agency and The Long Dark Tea-Time of the Soul. Max Landis, who shot into position as “that guy whom everyone wants to write their movies” after Chronicle, will write the pilot and executive produce. And I will cry at my screen, because Adams is my favorite writer of all time, and it’s tough to overstate the impact his books had on my adolescent life.

“Alongside the obvious yada yada I’m a lifelong fan, Long Dark Teatime Of The Soul (the second Dirk Gently novel) is one of the best books ever. Douglas Adams is a visionary who forever changed the way science fiction is written and talked about and even thought about and even the way real actual science is thought about and without whom our culture would be noticeably different for the worse, I’d also just like to say holy crap, it’s Dirk Gently. This is any writer’s ultimate project, and in the current TV space, it fits ridiculously well. Imagine a playground where you could come with any mystery, no matter how improbable, convoluted, or totally insane and then, simply by finding the right connections, you could tie it all down to one man, one private eye. If you’re familiar with the property, you know: there’s no freaking rules. Ancient gods? Sure. Larceny and petty crimes? Of course. Extra-dimensional aliens? I mean, probably; as long as you can make it funny, Dirk’s on the case. This is a dream project of mine, no joke, and I absolutely positively couldn’t be happier.”

The official press release has all the typical “This project is going to be awesome!!!!” quotes—Ideate Media Head of Production and Development Arvind Ethan David, a “friend and protégé” of the late author who got his estate to OK the deal, says adding “the mad genius of Max Landis to the mad genius of Douglas Adams is a dream come true.” IDW President David Ozer says Landis “represents the ideal voice in bringing Dirk Gently to television.”

Most interestingly, however, is Adams’ long-time friend and agent Ed Victori saying the author “always maintained that his Dirk Gently novels had much greater dramatic potential than his better known Hitchhiker’s Guide to the Galaxy series. I think he is about to be proven right—yet again.”

This will be the second time Dirk Gently gets the TV treatment: A Dirk Gently pilot aired on BBC4 in 2010 and led to three further episodes being aired in 2012, after which it was canceled. There were also radio adaptations, because of course. It’s Douglas Adams.

IDW Publishing, of which IDW Entertainment is the film/TV arm, will also release a series of Dirk Gently comics some time next spring. For the show, the road to production will be less straightforward, since IDW and Ideate still need to get an actual network to pick the thing up. But hey, it happened with American Gods. Anything is possible.