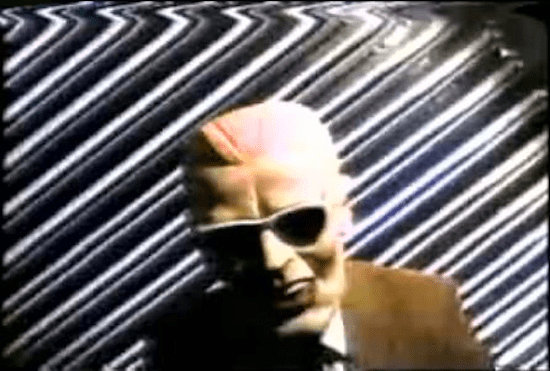 Everyone was all excited about 11/11/11, but how could they possibly ignore 11/22/11? More than simply being easy to remember, it’s also the 24th anniversary of the Max Headroom Broadcast Signal Intrusion, possibly one of the strangest moments in American popular culture.

It all began in Chicago, 1987, during the WGN 9 o’clock news. During the broadcast, a garbled image of someone dressed as Max Headroom appeared on screen accompanied by a strange hissing sound. In order to get control of their signal, technicians switched to a different antenna which cut off the intrusive broadcast. But it wasn’t over. At 11:15 pm, during an episode of Doctor Who on PBS, the signal returned — this time with audio.

It featured the same unknown individual dressed as Max Headroom, shouting and babbling wildly with a heavily distorted voice. In the course of his rantings, he touches on newspapers, sports casters, and especially “nerds.” He also hums a couple of bars from the Clutch Cargo theme song, and throws a pepsi can at the camera. After a few moments, the image changes to that of someone getting spanked with a fly swatter and the transmission abruptly ends.

After that, there were no more broadcast; the mysterious Max Headroom signal hacker was never heard from again. It’s a great piece of media lore that has more or less been forgotten, possibly because it made no sense but also perhaps because the perpetrator was never found.

So sit back and enjoy this wonderfully anarchic moment in hacking history. If you thought taking down a media outlet for the “lulz” was new, you’ll find that you are quite wrong.