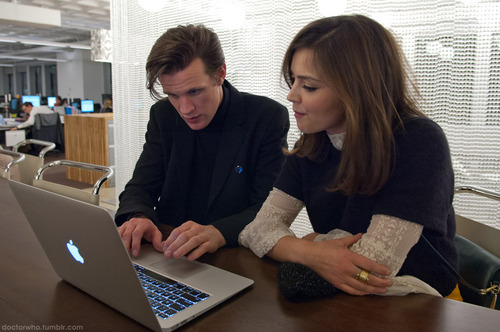 Like, right this second. Or a while ago, depending on when you’re reading this. Doctor Who’s Christmas Special is quickly approaching and with the promotion wheels are spinning, what better way to promote your show (with legions of wild fans) than on Tumblr? Matt Smith and Jenna-Louise Coleman posted on the official BBC America tumblr account. What could they possibly have had to say? Hit the jump to find out!

tumblr tumblr tumblr….smithers here, (matt smith, the DOCTOR) we just answered your who tumblr questions…… loved em… thanks for posting them, i hope you like the xmas episode….seee you reeeeallllllllllll sooon!!! lots love. m xxxx pps so you know its me blackburn rovers rulllllllllleeeee!!!!!!!! x

hey tumblr world…coleman here.. next to Smithers…live from BBC America! thanks for the questions! loving your work!!! NYC here we come! see you christmas dayyyyyyy……cook a souffle in true festive spirit! xxxx

The account received thousands of questions in their ask box, according to BBC America. You can look for their answers to show up tomorrow.

(via BBC America on Tumblr)