Throw Money At This! You Can Help Kickstart Interplanetary Engines For Tiny Satellites

Who needs a long, drawn out grants process when you've got a whole Internet full of folks with a couple bucks to throw in the kitty for space exploration? 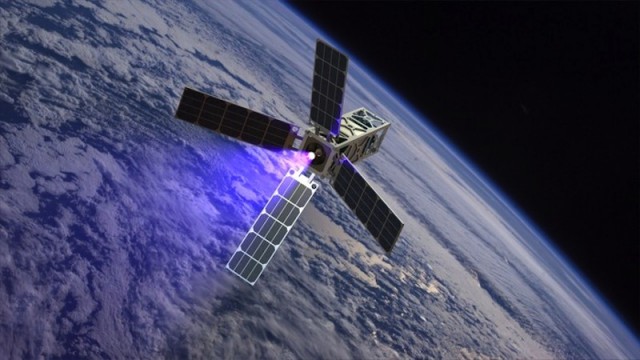 Researchers at the University of Michigan want your help to power the next generation of space flight. They’re not counting on sending shuttles anywhere, though — their plan for tiny, plasma-driven thrusters that could propel micro-satellites into interplanetary space as early as 2015. To hit that ambitious goal, though, they’re not counting on the traditional grants process — which can be quite protracted — and instead taking their funding needs to the people via Kickstarter.

The theoretical thrusters would be powered by plasma jets that could use water or other liquid fuels as a propellant, ensuring that they could carry enough fuel for long distance trips to other planets or even out of the solar system. Since the satellites they would be pushing are so small, the thrusters don’t have to be terribly powerful — it’s more important for them to be fuel efficient in the long run. While the engines are only theoretical right now, researchers are confident that with just  A $200,000 investment, they can be testing the thrusters in laboratory settings in just a few months thanks to time and money saving miracles like student labor and 3D printed parts.

JP Sheehan, a researcher on the project, said funding the research through Kickstarter not only has the potential to speed up development, but could also help engage the general public in science research and space exploration more directly, letting funders feel involved in scientific pursuits that can often seem distant or abstract:

A portion of every US citizen’s tax dollars go towards satellite development, but layers of bureaucracy isolates the individual from the incredible science to which they are contributing. When a person picks a project that engages him or her personally, a relationship between that person and their project develops. That sense of ownership is very rewarding as they follow the mission to completion.

Though they’re only about the size of a loaf of bread, researchers think the cube satellites have enormous potential for space exploration. Since they’re simpler to build than large satellites, they can be developed quickly and customized for a wide variety of missions, from doing research on asteroids to the team’s stated goal of one day sending research satellites to search for signs of life in far flung locations like Saturn’s icy moon Enceladus. Close to Earth, networked swarms of cube satellites flying in formation could monitor the planet the way larger satellites do but at a fraction of the expense The low cost of the satellites adds to their versatility as well. Here’s Sheehan again.

Not only do they open up the possibility of new and exciting missions, but they fit the budget.  Short development cycles and lower overall costs reduce the possibility of funding being canceled, which prevents waste of time and resources.

If you want to learn more about the project and maybe throw some of your own resources behind it, check out the video from the Kickstarter below.