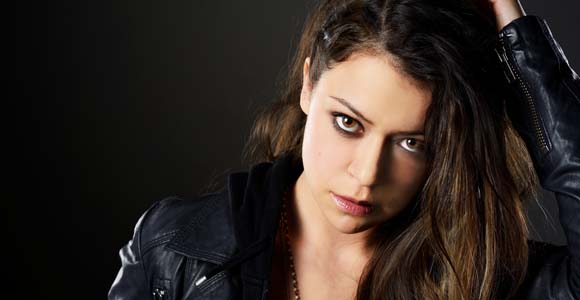 Actress Tatiana Maslany won Best Actress in a Drama Series at the Critics Choice Television Awards for her exceptional performances on BBC America’s Orphan Black.  In the series, Maslany plays not one role, but 7 clones, each with a distinct personality and outlook, often interacting with one another.

“Thank you so much …Our weird little show would be nowhere without you guys talking about it.”

This is an amazing win for Maslany, as it is the first award she has received for her work on Orphan Black, the science fiction drama that will be going into it’s second season in 2014.  In the show, Maslany stars as Sarah, a woman who arrives off a train, sees someone who looks identical to herself committing suicide, and decides that she has the perfect opportunity to empty her doppleganger’s bank account and solve all her problems.  However, she soon discovers that even more people, from all over the globe, share her face.  The show is full of suspense and conspiracy, and provides amazing opportunities for Maslany to play Sarah and the rest of the clones, sometimes even pretending to be one another, in a role that truly shows off her acting talent.  BBC America seems happy with Maslany’s performace too, with BBC America General Manager Perry Simon commenting,

“Tatiana Maslany is truly television’s brightest new star. Her tour de force performance on Orphan Black is richly deserving of this honor and we are thrilled that the TV critics have recognized her exceptional talent.”

You can watch Maslany accept the award below, and I strongly encourage readers to catch up on Orphan Black, especially if action, drama, and a bit of comedy sound like a good mix for your sci- fi television.