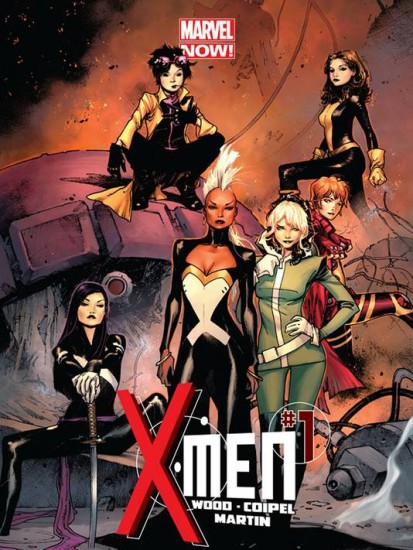 Last week, Marvel revealed a teaser for a new title from Brian Wood and  Olivier Coipel. We surmised it was going to be a title with X-Men characters, specifically women, because of the double helix and XX logo. We had assumed this was going to be a completely new title and while we were partly right on that we’re happy to say we were also partly wrong. Wood and Coipel’s new title is not a “new” title but the relaunched Marvel Now X-Men series starring Jubilee, Storm, Rogue, Kitty Pryde, Rachel Grey and Psylocke.

Marvel broke the news with USA Today in an interview with the creative team.

“Marvel takes a look at its spectrum of X-Men books and fills needs. This is the book that is like a traditional X-Men book,” said Wood. Except it’s not because the X-Men title has never featured an entirely female cast before. While Wood was already on the adjectiveless X-Men, this series is part of the Marvel Now! initiative of relaunched titles. It will begin in April with issue number one.

“I feel like as far as the X-Men go, the women are the X-Men,” Wood explains. “Cyclops and Wolverine are big names, but taken as a whole, the women kind of rule the franchise.

“If you look at the entire world as a whole, it’s the females that really dominate and are the most interesting and cool to look at. When you have a great artist drawing them, they look so amazing and always have.”

They go on to explain part of what the plot for the new series will be but I won’t spoil it here. Editor Jeanine Schaefer is helping Wood juggle the cast and says he’s “never met a bigger X-men fan than her.” Though Jubilee is set to be the starring player he said, “I don’t want to make it the ‘Jubilee and friends book.’ They’re all A-list characters — I’ve got to make them all shine.”

He also made sure to point out there would be romance in the book but “in the classic X-men way — the way it used to be.” He’s hoping to challenge the double standard that exists when it comes to female characters’ sex lives. “We’re just going to do it. We’re not going to worry about that,” said Wood. “If Kitty or Rogue has basic human bodily urges, tough luck (to those opposed). To me, that’s as much of the X-Men as anything else.”

So what do you think of the line-up? Wood mentioned he also wanted Emma Frost involved but that Marvel said she was “busy.” Personally, I think it’s a major league group and can’t wait to pick it up.