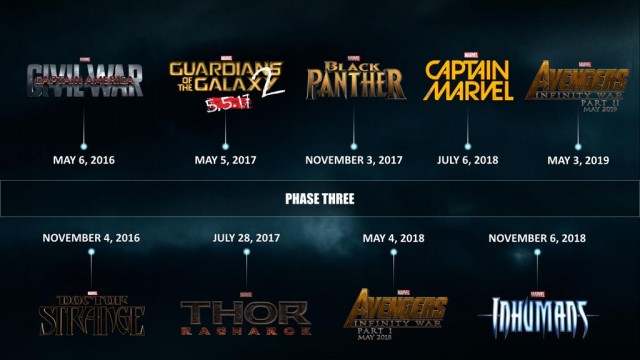 Remember how we were all looking at Marvel Phase 3’s rollout schedule using pictures some yahoo took at the press event? Well NO MORE. Marvel released the official image through their Twitter account today.

Pratt has just put himself in the growing list of Marvel movie actors who’re ready and raring to crossover into the television tie in to the universe. But ultimately he knows it’s up to Marvel, not him. Zap2it got the word from him at a recent press event:

I wouldn’t rule it out. Marvel would have to decide, but if it made sense for the brand and for the story, yeah sure.

While Agents of SHIELD has been getting a little… alien-y in its second season, or at least more alien-y, since the secret of Coulson’s resurrection was revealed, it’d still be a bit of a stretch for Pratt’s Star-Lord to appear on the show. On top of that, I imagine that the heavy emotional event of Peter Quill finding and revisiting his home planet for the first time in a few decades is something that’ll probably be reserved for a movie, not a portion of a television episode. So I have a different proposal, Agents of SHIELD, that’ll let you have your Chris Pratt guest stint and eat it, too:

Agents of SHIELD/Parks and Recreation crossover.

The SHIELD team arrives in Pawnee to investigate reports of mutant raccoons and mysteriously disappearing trees in Ramsett Park. Local government meets secret government. You should be able to take it from there, SHIELD writers. You can send me my royalties in the form of a subscription to Unbeatable Squirrel Girl.