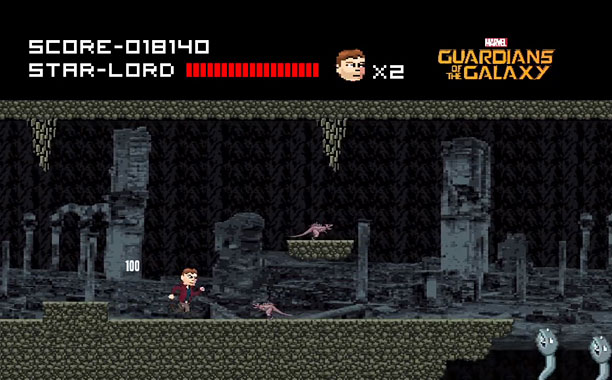 James Gunn has been posting previews from the Blu-ray on his Facebook, including this look at what an 8-bit Guardians game would look like. Don’t lie, you’d play the hell out of this on your spaceship while listening to cassettes.

He also gives us a look at what inspired the film’s score (which, if you haven’t gotten, is a mistake – “Black Tears” is a gem):

Over on Vulture, Gunn has also finally explained why the Dancing Groot toy took so long to get made – and it actually makes perfect sense.

While we were still shooting the movie, I brought up putting Dancing Baby Groot out as a toy. The reason it didn’t happen is because you have some control in the film industry over secrets getting out there, but the people you don’t have much control over are the toy people, unfortunately. Those toy designs get out, always! And people definitely would have gotten ahold of the Baby Groot if we had started manufacturing it in time for it to come out after the movie, so that was the biggest reason we didn’t push on that particular element.

As someone who is very serious about spoilers, I thank you, James Gunn.

Will you be buying the Guardians Blu-ray for the holidays?