Give it to me right now. 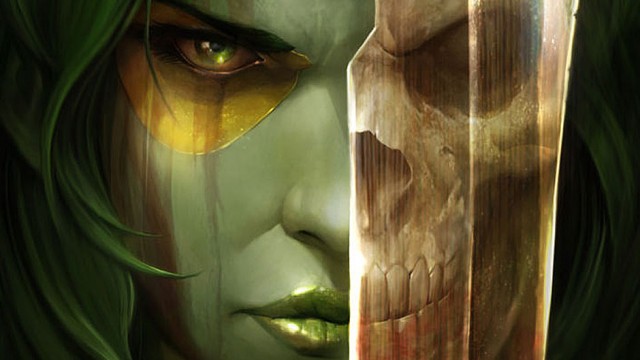 There are a plethora of new lady-led comics coming to Marvel in the spring, but the one we’re most excited about might just be Gamora. Lucky for us, the book’s writer (and Guardians of the Galaxy co-scribe) Nicole Perlman had some excellent things to share about the new title over on Marvel.com.

Gamora’s first-ever solo comic comes in the wake of other successful GOTG spin-off titles like Legendary Star-Lord and Rocket Raccoon, and is a dream come true for Perlman.

“I had always dreamed of writing a comic book series,” she said. “In film school we studied comic books as the art form that is closest to film, and it always struck me as an incredible way to realize a story.” As for Gamora, Perlman feels that there’s “so much mystery surrounding her origins and the source of her change of heart” that she will be an interesting character to further delve into.

The book will feature flash-backs from Gamora’s past which will give insight into her psychology, but will also be filled with action. “What is it that makes her so unbeatable in battle?” asked Perlman. “Is it simply because of her training, weaponry, and enhancements? I posit that there is something more going on within her psyche than initially meets the eye, and having a solo series gives us an opportunity to explore that in-depth.”

Gamora, a character Perlman says has “many layers and contradictions,” has a very different reputation than the woman we see in GOTG, and that drew Perlman to the character.

“In the movie, Gamora is the ethical engine of the team — yet ironically is also the one with the most innocent blood on her hands. How did that personality change come about? At what point did she decide, “enough is enough?” These are the questions we are going to explore, through a story told in the present day.”

You can expect cameos from the other Guardians, as well as Badoon, Magus, and others. And the book’s tone will derive from other sci-fi classics, including Total Recall, The Matrix, and Enemy Mine, with ideas of memory and mistakes coming into play. But Perlman says Gamora will have learned from her mistakes to become a better assassin (and person, of course):

“An aspect of Gamora I hope to highlight is her desire to empower those without a voice; to show them how to free themselves not just from their oppressors, but from their own fears and hatred. Only then, will they have a fighting chance.”

You can read the full interview with Perlman over on Marvel.com, and look for Gamora to hit comic store shelves next spring.