Your mom's a crater. 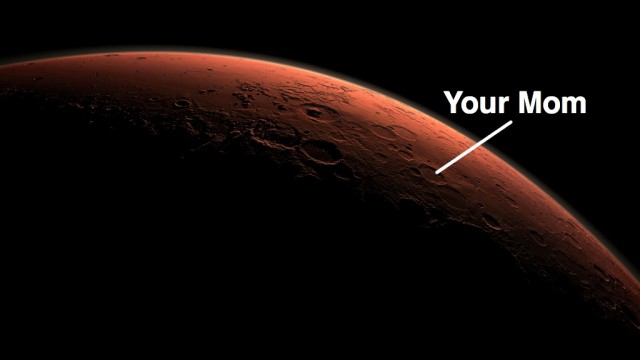 Didn’t get Mom a Mother’s Day gift yet? You can name a crater on the surface of Mars after her, and help fund space exploration in the process.

Uwingu is offering the chance to name craters in time for Mother’s Day as a way to raise funds for the grant programs. These grants help fund a number of important space projects like the Allen Telescope Array at SETI, Astronomers Without Borders, The Galileo Teacher Training Program, and more. They’re open to scientists, students, teachers, and institutions to apply for grants.

So even though your mom-crater probably won’t be recognized by the International Astronomical Union, the body in charge of giving space things official names, you’re still helping fund important research. The craters named through this program will be recognized on the official maps used in the Mars One mission to establish a permanent human settlement on Mars by 2023.

This sounds like a better deal than those online star registry offers.

(via Universe Today, image via NASA, labeling my own)