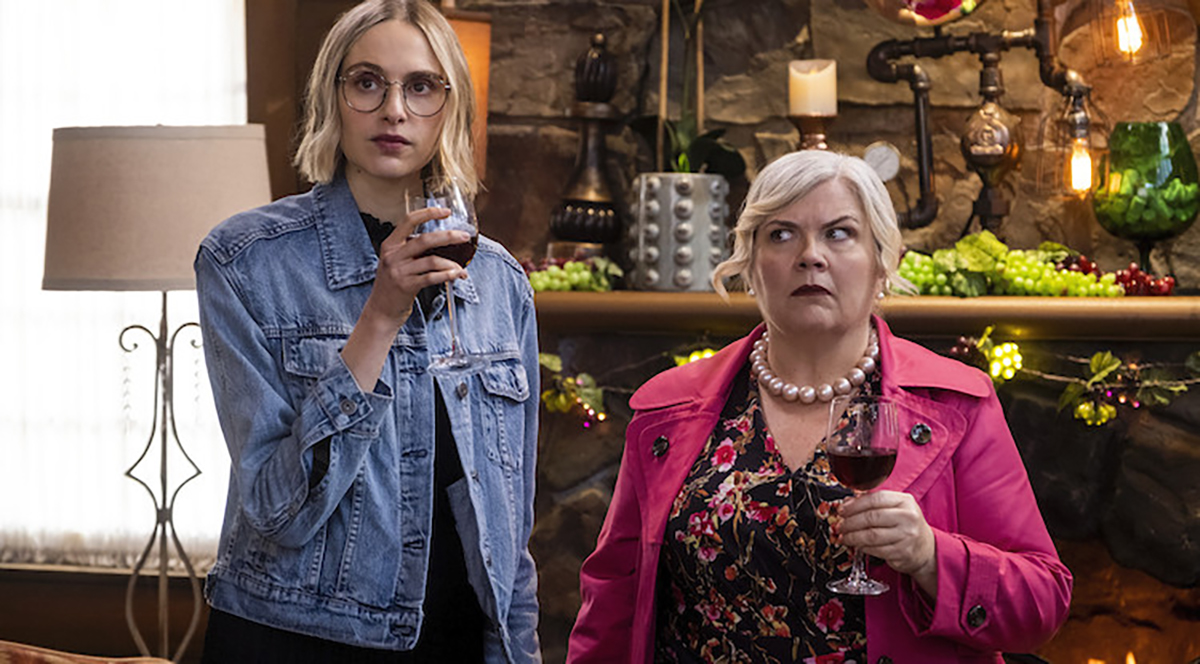 Ever wish you could watch a show that feels like Murder She Wrote but is absolutely tapped into the absurd? Well then, Mapleworth Murders is the show for you! A Quibi original created by Paula Pell and John Lutz, the show feels perfect for fans of everyone involved. Paula Pell and John Lutz, both former writers from Saturday Night Live, bring to life a world where a writer and her niece must solve the murders happening around town, and it’s a bonkers trip into this small-town life. If you threw Angela Lansbury into the mix, she’d fit right in.

Talking with Paula Pell and Hayley Magnus, the dynamic duo who take us on this journey, it’s clear that the show was just as fun to make as it is to watch.

THE MARY SUE: I really liked the show because it felt like I was watching a Twilight Zone version of Murder She Wrote and is that fun with comedy- Paula, we talked back when you were doing press for Wine Country and this is obviously a very different kind of comedy- so as actors and writers, is it fun to get to play in a very kind of set world where it’s absurd and out there but you have kind of these requirements and it’s not so much you can play around and do whatever you want?

PAULA PELL: I loved it because I love old 70s shows like any of those shows that were either the murder mystery type or the police dramas or the medical dramas from the 70s or I love like Fantasy Island or any of those types of shows, The Love Boat, that always had a parade of people guest starring and all that. And it was fun to play this sort of buttoned-up matron but then the script itself we were kind of filthy and a lot of innuendoes and it was super fun that way. And I loved having a niece in it because I am one of those people that has spent most of my life putting my mothering talents into my dogs and my nieces and nephews because I don’t have kids so, I have kids but they’re a different relationship.

HAYLEY MAGNUS: And I get to reap the benefits of that so it was ideal.

THE MARY SUE: And Hayley I like that-well, I guess she’d technically be Gen Z- but I like the trend of your character where they figure something out because she’s taken a selfie and in the background is the clue and, I don’t know, it kind of makes me feel like Blue’s Clues in a lot of ways because you have to figure it out based on this tiny thing and so I wanted to know how much-obviously the show is very scripted- but how much was it you guys playing around and finding those little details or finding something funny and going with that?

HAYLEY MAGNUS: That was all the genius of Paula and John Lutz because I get when there’s a murder mystery, it has to be quite specific. The clues have to be there. And they were but I agree, I really like how this now gives us justification to take more photos of ourselves because actually, what we might be doing, is solving a murder. So look at us go. And like there’s like the great titans of comedy in Paula and John and J.B. Smooth and all guest stars and so was there extra joking that they would just pull out like the most gorgeous and hilarious rabbit? Yes, there was a lot of that going on. But I think that the scripts were-they really allowed for that movement while also…you know, it’s ten minutes. You got to get down to business quick. So yeah, I think they did a fantastic job while allowing-if someone wanted to go somewhere, they really let them.

THE MARY SUE: And yeah, Paula, as a writer, is it- well you worked on SNL for years- but is it hard to adapt to this format because it is an extended series and isn’t just a one-off sketch but to do it in those short bursts or is it easier than committing to a full thirty-minute comedy?

PAULA PELL: At first, I think we approached it trepidatiously like okay, this is a  Quibi and it’s short and how do we write that? What is the narrative shape of this? And then once we figured out that we would do three per story, so it’s three episodes per story per murder, that it was just three acts of a half-hour show. Or just three acts of an hour-long procedural just kind of squished into thirty-something minutes. So it didn’t feel different once we looked at it that way because the first third of it was this murder happens and we set up a situation-they’re at a winery or they’re walking around town and they go to the butcher or they’re going to see a musical group- and then it’s the setup and then the murder and then a little bit of a cliff-hanger trying to solve it, there’s all these twists, and then the third act is trying to resolve it. So it’s kind of your standard story-telling that we’d do on another show and then the other thing that I was always impressed with Quibi was-because it was a new platform and we were kind of going into it blind and, you know, obviously Jeffrey Katzenberg has a big pedigree in terms of movies and TV so he knows how to create production and so it didn’t feel different. The crew and the quality of the production, just everything we were given in terms of the creative design…everything just felt so big and so great that way. And we shot in the backlot and so we walked into those big buildings that were real old Victorian buildings-

HAYLEY MAGNUS: It was so amazing.

PAULA PELL: It was Abigail’s house and we walked in and-I’ll never forget, it’s my favorite detail, in the kitchen in Abigail’s house, there were dog toys that have been washed that were drying on a drying line and I was like “that is my favorite detail in any set that I’ve seen in my life” and I found the person that was responsible for that in the design department and I was like “That made my life”. Because I have so many times hosed off a dog toy that was filthy and laid it out to dry and it was such a good character thing, you know? So, it just felt very much like they didn’t short us on any of the quality of it.

THE MARY SUE: It’s very much a lived in world and-I don’t know if you remember from the last time we talked Paula but, I talked about how I’m a big comedy nerd and I love that this show has all of these cameos and they’re not overpowered either, they’re just these little moments of you look up and you’re like “Oh, there’s Tina Fey” or “There’s Tim Meadows” or whatever it is-

PAULA PELL: Like “Oh there’s Tina Fey being dragged out of a winery singing ‘This Little Crotch Of Mine'”.

THE MARY SUE: [laughs] Yeah, is that fun to get to play with your friends in that way that’s not like “Oh people are going to love your cameo on this”.

PAULA PELL: Yeah, it felt a lot like they were dropping by and the nice thing about that is when you ask busy people to do stuff, it’s very emotionally vulnerable when you ask your friends in showbusiness to do something of yours because if you get rejected, it’s like a thing of like “oh really, they said no?” because you really think they’re going to turn and just be like “Oh I’d love to do it” and almost always if they’re saying no, it’s just because they can’t fit it in because sometimes people go “can you come do a guest star on my thing? It’s 18 days of shooting”, you know? And with us it was like “it’ll probably be like 2-4 on Friday afternoon, you come in one for a fitting and come in and shoot it for 2-3 hours” and so it was really much easier to get the people we wanted.

HAYLEY MAGNUS: I think that’s a testament, as well, to your and John’s writing, Paula. And also that you’re both so beloved. Like everyone just seemed so happy to be there and I think it’s because Paula and John are amazing people.

PAULA PELL: We had a lot of shit on these people so they had to do it.

HAYLEY MAGNUS: It’s mostly that. It is that.

Mapleworth Murders premiered on Quibi this week and it is definitely worth the watch!