Map of Every McDonald's in the U.S. | The Mary Sue

Map of Every McDonald's in the U.S. 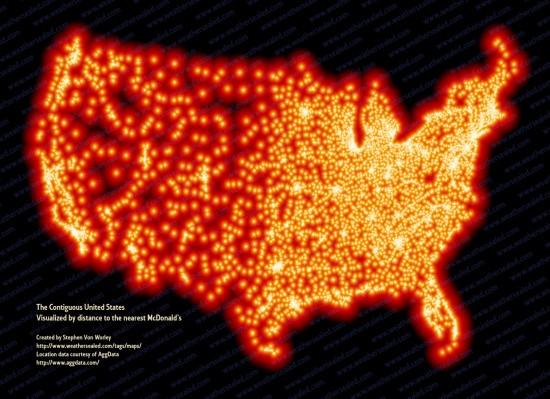 McDonald’s establishments are everywhere. However, they actually are, unlike how a Starbucks is everywhere until you actually crave it and then, what do you know, you are no less than ten long blocks away on foot from the nearest one somehow. Created by Stephen Von Worley with the help of AggData, the above map shows the location of every McDonald’s in the contiguous United States.

Aside from the obvious areas of scarcity in the East — such as in Florida’s Everglades — the West boasts the longest distance between a McDonald’s to another one, due to things like deserts and the more spread out nature of city hub location. The farthest spot from one McDonald’s to the next is 145 miles by car, between the small Dakotan hamlets of Meadow and Glad Valley. Those poor people must really be missing out on McRibs.