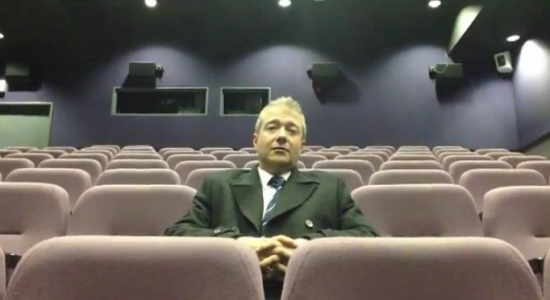 The short film “Many Worlds” is like a choose-your-own-adventure story, but instead of making a conscious decision about which page to turn to, the film automatically edits itself in real time, as the audience watches, based on sensors that measure things like muscle tension and heart rate. The film changes based on how the audience is physically reacting to it, and can therefor end in one of four ways.

The website for the film gives the following description of the story:

Two students Charlie and Olivia arrive at the apartment of their friend to try and cheer her up on her 19th birthday. They find Connie, a physics student, has sealed herself in a coffin-sized box with a cyanide gas-capsule connected to a Geiger counter. At any time a large enough burst of cosmic rays in the atmosphere could trigger the cyanide and kill Connie; in fact it could already have happened. Charlie – also a physics student – realises Connie is performing a twisted version of a famous quantum physics experiment about the nature of reality, but one that was never meant to be performed in real-life.

The “famous quantum physics experiment” is of course Schrödinger’s cat, which is the perfect backdrop for a film that is altered by being observed. How the audience reacts to what they see on screen actually alters what they see next.

The writer and director of the filme, Alexis Kirke, is the composer-in-residence for the Plymouth Marine Institute, and this sort of thing is what he’s known for. He’s known for his piece “Cloud Chamber” which is a duet between a violin and subatomic particles, and for playing waves of water as musical instruments in something called “Sound-Wave.” He holds two PhDs — one in Arts and one in Technology — and he’s sort of exactly the kind of guy you would expect to make a biometrically interactive film based on Schrödinger’s cat.

Kirke explains how the film works in this video:

“Many Worlds” will premiere as part of the Peninsula Arts Contemporary Music Festival from February 22nd to the 24th. The interactive nature of the film means it’s not really the kind of thing that can just be thrown up on YouTube, so I’m personally hoping Kirke arranges for the film to be shown in New York so I can see it.

I also hope he and I get to be best friends and go on adventures together. Kirke sounds pretty awesome.