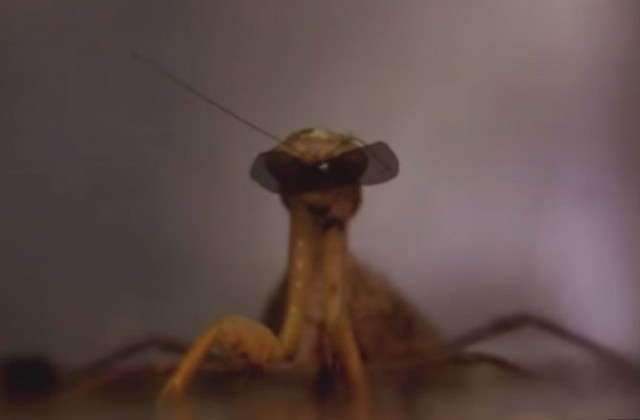 A very weird experiment is going on in the UK right now. To explore how 3D vision could eventually be instilled in robots,  neuroscientists have outfitted praying mantises with the world’s smallest pair of 3D glasses. Even though we’ll never get a M.A.N.T.I.S. movie, at least we may soon know if an actual mantis would be able to enjoy it.

A team of scientists from Newcastle University hopes the bizarre experiment will clarify possible differences between the way mantises use their 3D vision to see the world and the 3D vision that humans and monkeys have. Vivek Nityananda, one of the team’s researchers, said in a press release that the project could hopefully “open up all kinds of possibilities to create much simpler algorithms for programming 3-D vision into robots.”

Despite their minute brains, mantises are sophisticated visual hunters which can capture prey with terrifying efficiency. We can learn a lot by studying how they perceive the world. We can do this by fooling them into misjudging depth, in the same way that our brains are fooled when we watch a 3D movie.

Mantis’ “terrifying efficiency” as hunters is likely due in part to their unique stereoscopic vision–they’re the only invertebrate known to see in 3D.  To test the limits of this unique capability, the scientists showed the bugs images on a computer designed to simulate movement in the same way objects seem to come towards the audience in a 3D movie.

If the mantis demonstrates that it’s been “tricked” into thinking an object is rushing towards them, it may help the researchers determine whether or not the bugs can “judge” 3D. Here’s Man, Mantis & Machine, a 2D video the researchers made to show the world their bizarrely cute scientific methods.

After their hard work the mantises are rewarded with food and a lie-down. Not a bad life for a bug–definitely beats sexual cannibalism and being confused for a twig.

(via Gizmodo and Discovery, image via Computation of 3D Vision In Praying Mantises)