Mad Max Comic Co-Creator Thinks We Need Captivity Spelled Out For Us… With Rape Scenes.

"Without it, the story could be viewed merely as a bunch of young spoilt girls..." - Mark Sexton 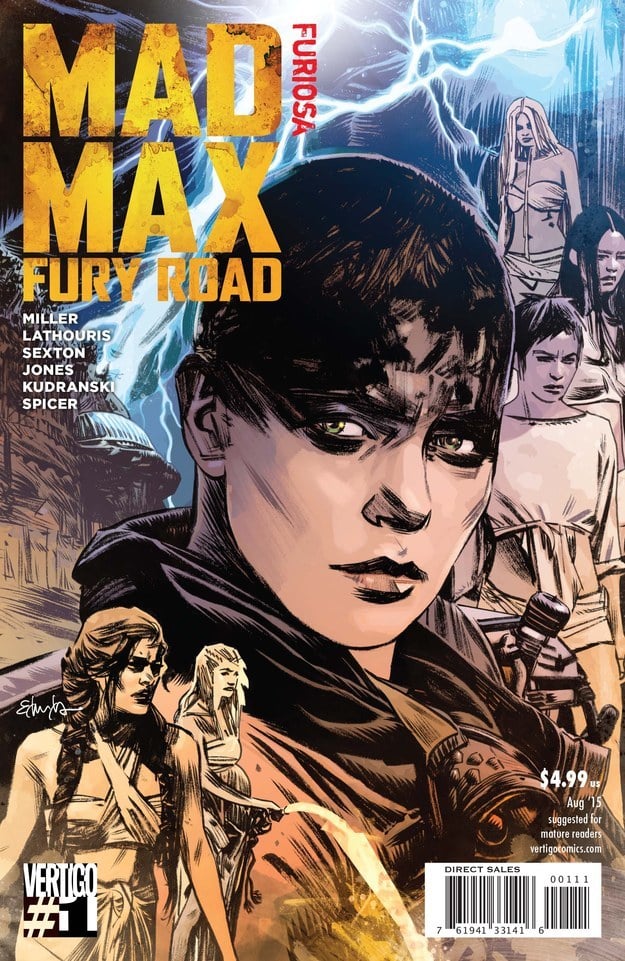 Not long ago, The Mary Sue reposted a thorough piece of criticism by writer, Ana Mardoll, of the long-awaited, highly-anticipated Mad Max: Fury Road Furiosa comic from Vertigo. She and I, like many others, rushed out to buy it the second we saw something with Furiosa on the cover, and many of us now wish we would’ve waited for Mardoll’s review first – because not only do many of us see the Furiosa comic as a complete reversal of everything that made the women in the Fury Road film so special, but apparently, the writer himself (as well as some fans) seems to completely misunderstand this line of criticism and why it exists.

A few days ago, Mardoll alerted us via Twitter to a comics reader on Twitter posing this question to Mad Max: Fury Road comic co-creator, Mark Sexton:

@Mark_H_Sexton A few people are saying that you are exploiting rape in the first issue, what would you say to that?

He’s not wrong. So, what did Sexton have to say to that? This:

@KameronJdevine Interesting. Could answer this any number of ways… — Mark Sexton (@Mark_H_Sexton) June 17, 2015

@KameronJdevine – but without it, the story could be viewed merely as a bunch of young spoilt girls whining about being kept in relative –

@KameronJdevine – luxury by an older man who’s concerned with their safety. Not really much room for dramatic tension there..! — Mark Sexton (@Mark_H_Sexton) June 17, 2015

Um, you had me at “central to the story.” Had his reply just been that, I would’ve been like “You know what, I think that the fact that needing to see rapes happen all the time whenever they’re discussed in fiction is sensationalist and exploitative, but I get someone choosing to depict that.”

It would’ve been a different discussion.

But then he blathers on with this ridiculous idea that readers won’t understand what loss of freedom is, and I wonder if Sexton genuinely believes that. I wonder if he genuinely thinks people wouldn’t understand the concept of women wanting freedom from a pustule-ridden, old dictator who rapes them whenever they’re ovulating without seeing the rape happen. Because as is seemingly usually the case, both in fiction and IRL, a woman saying she’s suffering isn’t enough. It has to be seen to be believed.

Mardoll herself brought up this point on Twitter, relating it to Max:

I will never not be amazed by the idea that readers NEED rape scenes because otherwise forced captivity might seem awesome.

I can only assume the comic which focuses on Max will have him raped multiple times, to clarify that being a blood bag is Not Fun.

Some fans joined in on the fun:

Can we really be sure Max wanted to escape? He only left because Nux took him for a ride. He probably liked it at the citadel. @PlasmaGrrl

And Mardoll ended her commentary on the subject with:

I am, ofc, being sarcastic, but we are LITERALLY hearing that without rape, no one would sympathize with the wives wanting to leave!

What I don’t understand is how Sexton can use the word “kept” in his response (“being kept in relative luxury…”) and then not immediately CHANGE HIS RESPONSE.  I “keep” belongings in plastic containers. One “keeps” pets behind a fence. Even when you say something like “I keep my children in the house after X o’clock” implies a loss of freedom. And while that’s OK for children – who need guidance, because they’re too young and inexperienced to navigate the world on their own in safety until a certain age – it is not OK for grown-ass women.

Being a “kept woman” is not freedom. Nothing that is free is “kept,” and a gilded cage is still a cage. And people understand that. We understood that in the Fury Road film! So the fact that Sexton says, without showing the rape, that readers might think the Wives are “spoilt girls whining about being kept…” disproves his own point about the need for the rape scene at all! Because without it, you still get a sense of women being “kept” somewhere. “Kept” is not freedom.

And so, it saddens me that the guy in charge of shepherding the Fury Road comic so fundamentally misunderstands his own source material.