Review: Mad Max: Fury Road Is a Lovely Orgasm for Your Eyes

And you'll want to go for multiples.

You’ve watched the trailers. You’ve heard the feminist buzz and the anti-feminist cries. Now let us tell you what we thought about George Miller’s Mad Max: Fury Road.

Shall we get this out of the way first? Is Fury Road feminist? I would have to say yes but it comes with a few caveats I’ll get to later. However, if you’ve liked what you’ve seen so far, I can guarantee you’re going to love seeing the actual film.

[Editor’s Note: There will be a few spoilers in this review, they will be marked as such and covered for those viewing on the website.]

Mad Max: Fury Road is a sight to see. The film does not require any knowledge of the previous three films in the franchise in order to enjoy or understand it but I feel like I should make note of a few things here before we go on.

Things you should know about director George Miller:

Things you should know about Mad Max as a series:

And they have every right to want that because Miller is a master of them. 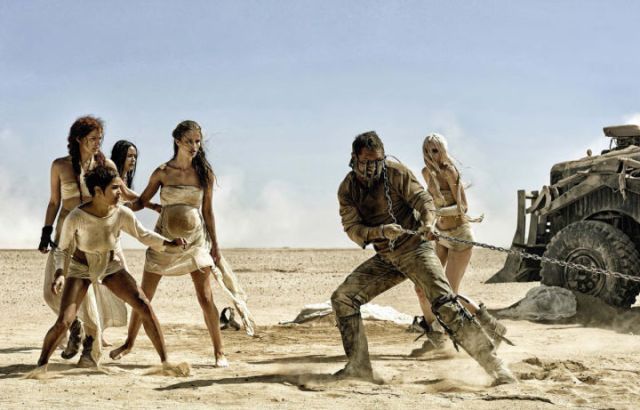 Without a doubt, Charlize Theron is the star of this film. Whether it was Miller’s intent to play switcheroo on viewers (her character’s name is Imperator Furiosa, the subtitle contains the word “fury”) or merely following in the footsteps of the films which came before and making Max the object which starts the wheels of the story turning, this is not Max’s journey. Tom Hardy’s Max is merely a chess piece in apocalyptic chess board. He plays his role well and doesn’t steal the show, doesn’t romance anyone. That’s not his job.

Furiosa’s job is a curious one. She’s a cog in the war machine built by Immortan Joe, a dangerous and devious villain it’s easy to root against, but yet she’s willing to betray him to save a group of women he “owns.” We don’t get to see any of Furiosa’s life before she makes her escape but it’s clear she’s on a larger mission.

While introductions to characters (specifically by name) come swift, if at all, all of them stand out. Collectively known as “The Wives,” the other main characters of the film are Courtney Eaton (Cheedo the Fragile), Zoe Kravitz (Toast the Knowing), Riley Keough (Capable), and Rosie Huntington-Whiteley (The Splendid Angharad). Although we barely get to know their history either, each has agency and individual personalities. Yes, they were kept as slave wives by Joe and are dressed in minimal clothing but we do not see them with him before being set free by Furiosa (while leaving strong messages behind for him like “We are not things!”), nor are their bodies presented to the viewer in a sexualized way. They’re not bending over the hoods of cars, they’re fighting for their freedom and lives. 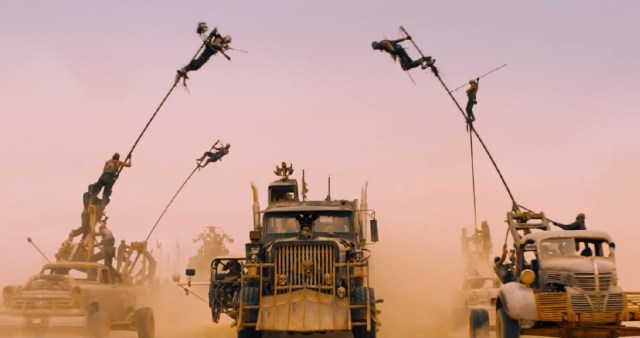 If I was going to fault the film for anything it wouldn’t be its treatment of women, which was far above and beyond most Hollywood action fare — getting them in on the action and all, but that it piqued my interest for so many other things I’ll never see explored. Yes, you absolutely get what it says on the tin — explosive rocket guitars and roaring engines of doom — but that doesn’t mean I can’t want even more from an action film. Fury Road could be a five hour epic and I’d still watch it and watch it again. And again and again. Part of me wishes it really was that length considering how much doesn’t get the chance to be fleshed out. There is a great deal to pull from; from the random Skeksis-like humans and willing-to-die War Boys to the Milking Mother and the Green Place. But that’s not Mad Max’s bag and that’s ok.

People flying through the air, explosions, and growling cars on the other hand, are Mad Max’s bag. And what comes out of that bag is glorious to behold.

Miller says “I think of action movies as a kind of visual music, and Fury Road is somewhere between a wild rock concert and an opera,” and I couldn’t agree more. Watching the action scenes of Fury Road had me literally on the edge of my seat. Hardy said of the production, “If you think a stunt is too extreme, or an explosion too spectacular, I promise you that it was there… I saw it.” You’ll have trouble believing you saw it too but Fury Road has some truly spectacular practical effects and stunt work which will leave your mouth hanging wide open.

If I hadn’t read about Eve Ensler consulting on set or heard about some men upset over Hardy’s secondary role in the film, I probably wouldn’t have remarked on the feminist aspects of the film specifically. I absolutely would have raved about how the film didn’t actively offend me as a woman, which is the very base of what I hope for when ingesting a piece of media. But Fury Road exceeded those base expectations by giving me interesting female characters who were on an even playing field. And yes, there are more than what you’ve seen in the trailers.

Should you see Mad Max: Fury Road in theaters? Only if you like to have fun.