“MacGyver” Robots Use Their Environment to Solve Problems, Lack Mullets

This is the perfect setup for a MacGyver reboot, Hollywood. Just saying. 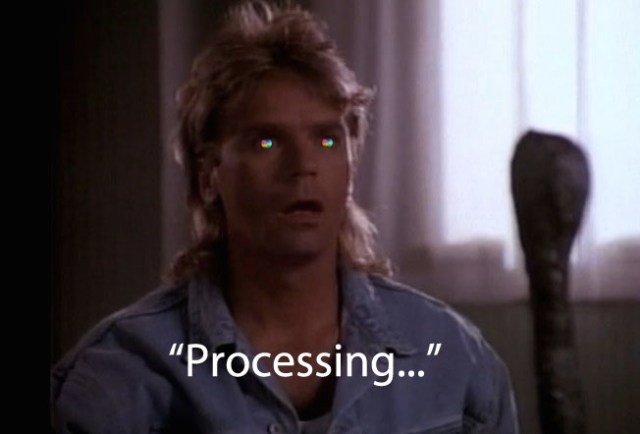 MacGyver was ahead of his time. So ahead, in fact, that robots of the future are being built based on him. Kind of. A video submission was made to the IEEE International Conference on Robotics and Automation with the title “Robots Using Environment Objects as Tools: The ‘MacGyver’ Paradigm for Mobile Manipulation.” If you’ll excuse me, I have to go write up a pitch for a MacGyver vs. MechaMacGyver script.

The robots may not yet possess the fine motor skills necessary to disarm a bomb with the innards of a pocket watch and a bobby pin, but the idea behind them is to teach robots to use their environment to solve problems just like people. Take a look at one of the robots figuring out how to cross a gap that’s too wide for its tiny robot stride without so much as a mullet to help. (Although I suggest you watch it paired with the MacGyver theme song, instead.)

The robot was already aware of the objects around it as the video shows, but it actively evaluated that the gap was too wide and picked an object wide enough to cross it. It may not be as flashy as all the stunts the actual MacGyver pulls, but it’s the first step in creating robots that regard their environments as an asset in problem solving instead of just another part of the problem.

Or maybe it’s just some clever marketing for a revival of the MacGyver reboot that didn’t pan out after its director bailed? I think I might prefer that to unstoppable, bemulletted robots. Better yet, make the MacGyver movie and then put the profits into MacGyver bot research, because I’m sure I’m not alone in that I would pay all of the money to see that movie. All of it.

(via IEEE Spectrum, image via MacGyver and Photoshop)

Previously in MacGyver and robots