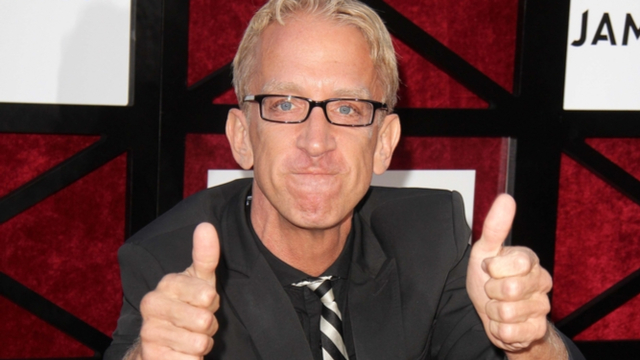 Well, it’s another day, another man in Hollywood accused of harassing and assaulting people in his place of business. This time, it’s Andy Dick, who has been fired from his current project, an independent movie called Raising Buchanan, after multiple reports of his on-set harassment and “misconduct.” According to The Hollywood Reporter, “two sources detailed Dick’s inappropriate behavior, which included groping people’s genitals, unwanted kissing/licking and sexual propositions of at least four members of the production. It’s unclear if those involved were actors or crew.”

When speaking to THR, Dick gave what might be actual worst response possible. If you’re looking for how to react to allegations of wrongdoing, take a lesson from Andy Dick and do the exact opposite of everything he says here.

He starts by acknowledging his reputation and placing blame on the team that hired him, saying “my middle name is ‘misconduct.’ They know what they signed up for.”

Step two to an awful response: The It’s Not That Bad argument. He defended himself by saying “I don’t grope people anymore. I don’t expose myself anymore.” He does have a reputation for doing both of those things.

He went on: “I didn’t grope anybody. I might have kissed somebody on the cheek to say goodbye and then licked them. That’s my thing — I licked Carrie Fisher at a roast. It’s me being funny. I’m not trying to sexually harass people.”

First of all, get Carrie Fisher’s name out of your mouth, Andy Dick. It’s disturbing that he legitimately doesn’t seem to see how the behavior described here is anything more than an attempt at dating. In his words, “I didn’t grab anybody’s genitals. Of course I’m going to proposition people. I’m single, depressed, lonely and trying to get a date. They can just say no, and they probably did and then I was done.”

These reports make it clear that Dick was physically and emotionally aggressive, with all of this taking place on-set, meaning AT WORK. Yes, film is often a different sort of work environment than, say, an office, but it is still a place of business and these are his colleagues that he is forcing to interact with him on a sexual and romantic level. He is placing 100% of the responsibility on them to shut him down when he’s crossed a line rather than being willing to even consider that line’s existence.

Which brings us to the next point in How to Blame Everyone and Everything But Yourself: It’s not his problem, it’s the culture!

It’s not clear exactly what he said, but apparently he made some comments about Harvey Weinstein that did not go over well with the filmmakers, presumably because they’re not horrible people. Dick said “They were so incensed by what I was saying. People are so sensitive.” He also commented, “I do understand that the temperature in the world right now is delicate.”

Sure, maybe the “temperature” is delicate. Or maybe Andy Dick has spent decades making people feel uncomfortable and it’s only now that people feel safe to speak out and assert themselves. At one point, he blames his age (51) for making everything so confusing. Harvey Weinstein also used this argument, and it is crap. If you refuse to treat people with decency, yes, we’ll hopefully, eventually reach a time when that is no longer deemed acceptable, when people won’t feel compelled to stay quiet. But guess what? You were always the problem.

Andy Dick admits that he doesn’t “know the difference between sexual harassment and trying to get a date.” But he also refuses to take any responsibility in figuring it out. He doesn’t seem interested in that possibility in the slightest. Even admitting that he’s confused, in his mind, it’s up to everyone else to come over to his way of thinking, to solve his confusion by realizing that he’s right, he’s always been right, and anyone who expects him to not lick and kiss and proposition his coworkers is just “too sensitive.”

“There were beautiful women and beautiful guys on the set. I flirt with them. I might kiss someone on the set and ask them to go to dinner. They are the ones that took it south.”

Thank you, Andy Dick, for this clear lesson in 1) How not to interact with your coworkers (or anyone!), and 2) How not to respond when those coworkers/fellow humans take a stand and make it clear you’re creating a harmful work environment.