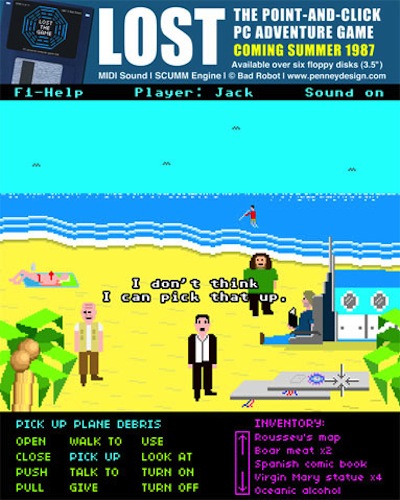 Somewhere, in an alternate universe, J.J. Abrams doesn’t make TV shows. He makes video games instead. There are definitely some things that our doplegangers are missing out on… (Zach Snyder tries to reboot Star Trek. Yikes.) It’s not all bad, though: In the world where J.J. Abrams makes video games, then Lost obviously replaces The Secret of Monkey Island as the pinnacle of point-and-click adventure games.

Unfortunately, LOST 1987 isn’t a real game, historic or otherwise. The Gif below is as close as we’ll ever come to playing this ingenious cross-media tie-in… Probably. A set of concept illustrations from graphic designers Penney Design, the faux-game reimagines some of the series iconic scenes and characters in the style of Tim Schaffer and Ron Gilbert’s classic. All your favorite players are there; Jack, Locke, Hurley, even the the smoke monster!

I know Jack was the central character for most of the show, which makes him the de facto candidate to replace Guybrush, but I think delusional Scotsman Desmond would be a better choice to recapture the goofy, craziness Monkey Island is known for. You can check out more images of LOST 1987 at the Penney Design website.