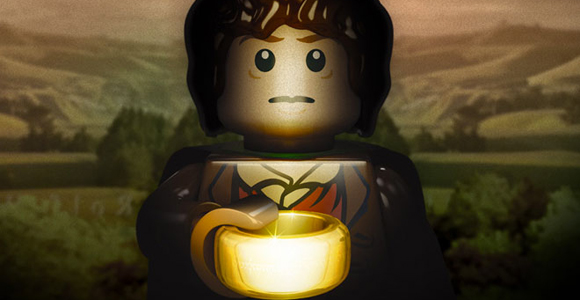 Tricksy Hobbitses. I mean, Lego. Yesterday the blocky toy manufacturer annoyed us with their newly announced Lego Friends line (Legos with boobs, for girls) and today they sock us with another whopper. They’ve acquired the licenses for The Lord of the Rings and The Hobbit. Well played, Lego. Well. Played.

Today, Lego and Warner Bros. Consumer Products announced a partnership that gives Lego exclusive rights to develop construction sets and other toys based on…Peter Jackson’s films. That’s right, these sets are less about J.R.R. Tolkien than they are Jackson’s version of Tolkien’s work. That’s not a bad thing, I’m just pointing out that these are basically movie tie-in products, there’s no mention of Tolkien at all in the press release:

The multi-year licensing agreement grants access to the library of characters, settings, and stories for THE LORD OF THE RINGS property, as well as films The Hobbit: An Unexpected Journey and The Hobbit: There and Back Again. LEGO® THE LORD OF THE RINGS construction sets are slated for a rolling global launch beginning in June 2012 in the United States, with LEGO THE HOBBIT: AN UNEXPECTED JOURNEY scheduled for later in the year.

Variety says new sets will be “leading up to the Dec. 14 bow of An Unexpected Journey.”

“Only Lego, with their expertise in the construction category, is capable of doing justice to the incredibly imaginative environments depicted in the world of The Lord of the Rings and the two films based on The Hobbit,” said Karen McTier, executive vice president, domestic licensing and worldwide marketing for Warner Bros. Consumer Products. “These films give life to amazing worlds and characters and we are thrilled to bring fans these products that deliver an imaginative play experience befitting of these beloved properties.”

Many fans were hoping that LOTR would be the next franchise to get picked up, especially after big ones like Star Wars, Batman and Harry Potter had been realized. “It’s particularly exciting to now be able to create sets based on the fantasy worlds and characters from The Lord of the Rings trilogy and the two films based on The Hobbit, not only because we know they will foster collectability and creative play, but also because these are two properties that our fans have been asking us to create for years,” said Jill Wilfert, vice president, licensing and entertainment for The LEGO Group.

Of course there is an official Lego LOTR site already up but the real question now is, when do we get the Lego LOTR video game? Inevitable, right?

(via The Brothers Brick and Topless Robot)

J.R.R. TolkienPeter JacksonThe HobbitThe Hobbit: An Unexpected JourneyThe Hobbit: There and Back AgainThe Lord of the Rings