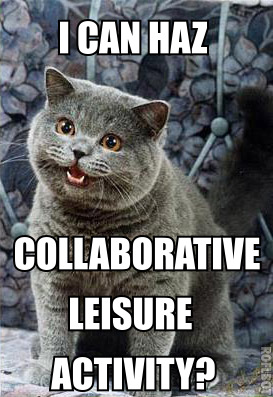 Clay Shirky makes a very compelling argument for why internet memes and the other creative collaborative phenomena of the internet (like Wikipedia) can be seen as an impressive human achievement, and a sign that our society has made a significant leap forward.

He draws a distinction between our current cultural setting and that of the pre-internet era, based on the ability of the internet to give us a “media landscape that lets us work collaboratively, cooperatively, cumulatively.”

Doing something is different than doing nothing.

The internet as the next distinct stage of human cultural evolution?  It’s not like, as bloggers, we don’t have anything invested in promoting this idea.