This article was originally published on ilikecomicstoo.com and has been reposted with permission. It was written in 2013, prior to the release of Loki: Agent of Asgard, and discusses writer Al Ewing’s stated plan for that series and the character’s background in Marvel lore up to that point. Here’s a blast from comics history past.

Is Loki batting for both teams (or all of the teams)? Wasn’t he married? Did he really turn into a lady once—twice—many times? These answers and more in this brief history lesson/discussion about our favorite god of mischief.

Right! So, before you read the following or watch the video above, please note that there will be spoilers for Marvel’s Siege, Journey into Mystery, and Young Avengers. If you haven’t caught up, I’ll give you some time to navigate away and look up funny cat montages.

Loki is to become the star of his very own book, titled Loki: Agent of Asgard. That’s pretty exciting, but what really seemed to stir up fans recently was this bit of news from the book’s writer, Al Ewing:

Yes, Loki is bi and I’ll be touching on that. He’ll shift between genders occasionally as well.

Fans seem to have split into three camps on this:

Let’s pick apart the arguments and learn a little about our favorite god of mischief along the way, shall we? 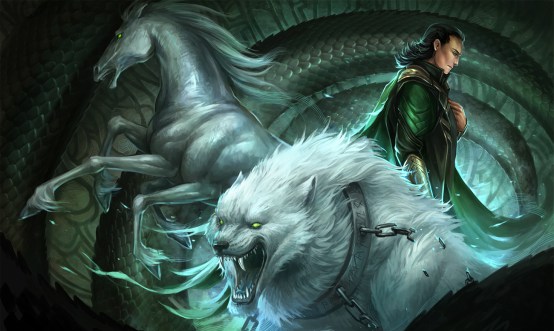 1. “Loki has always been completely straight.” Well, yes and no. While all of Loki’s relationships that we know of have up until now been with women, he’s not exactly Captain America whitebread dunked in vanilla in terms of sexuality. Let me explain:

Loki is, in Marvel comics, the biological father to Fenrir (a giant wolf) and Jordmungand (a giant snake). He had these children with a shapeshifter like himself, but Valhalla knows what form he must have taken in order to conceive these creatures. Similarly, in the Norse myth that inspires much of Marvel Loki’s history, he shapeshifted into a female horse in order to produce Odin’s eight-legged mount, Sleipnir. I am absolutely not suggesting that these facts imply bisexuality, but considering his out-of-the-box inclinations and abilities, it seems kind of silly to get upset over the idea that Loki just might not be interested in women exclusively. He’s a pretty open-minded dude.

At the same time, Loki is a character who uses sex more as a weapon than as something for enjoyment, which means it’s difficult to even place him anywhere on the Kinsey scale. Did you know he was married? Yeah, married! Of course, he tricked the goddess Sigyn into marrying him and could care less about her now. No, seriously, he was handcuffed to her as a punishment once. She’s never really mentioned in the comics these days … even after Ragnarok, in which we assume she went kaput. Loki does not make a caring husband.

He also doesn’t maintain contact with the mothers of his kids. In fact, the only reason he even had those kids was to forge power alliances with their moms. The one child he does occasionally contact is Hela, and that’s because she’s the queen of Hel and can pull strings for him. His children were conceived for convenience, probably not as products of affection or lust. Loki’s fondness for women, therefore, isn’t exactly a sure thing. In fact, his fondness for any sex isn’t a sure thing. He could even be considered asexual at some points. 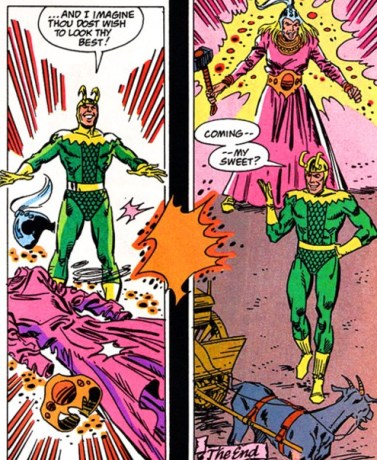 This is a real thing that happened in the comics

2. “Loki has been bisexual all along.” I was in this camp at first … But Loki having always been obviously bisexual is a little difficult to say, too. His interests aren’t exactly plain, yes (he put Thor in a dress once and kind of … flirted with him?). Such tastes don’t equate to bisexuality either, though. The guy also has a real penchant for turning into ladies, a notable example of which was when he borrowed—all right, stole—Sif’s body. He’s also assumed the Scarlet Witch’s form and kissed a man, etc. etc. You would think these examples hint at gender fluidity, but in these cases he changed his sex (the physical outside bits) not necessarily his gender (what he feels like inside), and the only reason he did so was to manipulate others. I like to think the fact he does it so much means part of him must enjoy it, but that’s impossible to say for sure. I guess we’ll be learning more from Ewing’s run.

Perhaps the strongest argument for Loki having always having encompassed some degree of queerness is the fact that he comes from a world that does not, for all we know, impose the same heteronormative standards as earth. He’s a god/alien/what-have-you from an entirely different plane of existence. I don’t recall coming across evidence suggesting Asgardians were especially closed off to the idea of batting for a variety of teams, so it’s possible he’s open to doing so. 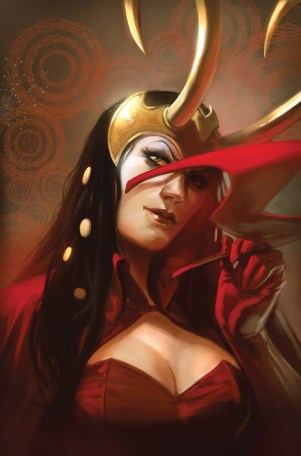 Loki as the Scarlet Witch in ‘Mighty Avengers’

3. “This is a cheap marketing ploy and/or misrepresenting bisexuals and/or gender fluid individuals.” In terms of misrepresenting a real population or turning Loki into some kind of “evil queer” trope, especially with how he’s used the female form as a tool just to mess with folks in the past … Well, I completely understand wanting to avoid connecting gender fluidity and bisexuality, two underrepresented facets in this medium, with misogyny, manipulation and a number of gross things. But even if Loki is bisexual and gender fluid, which we can’t assume, that’s not necessarily awful. We know that this fictional godlike character does not represent a real group of people. 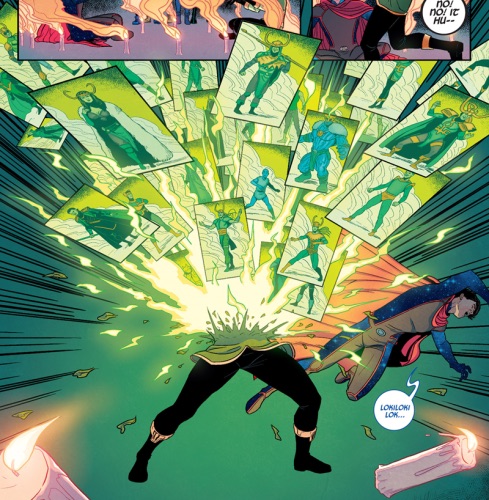 Now, you just learned a whole lot about Loki, but all of it referred to the character from much older comics. The specific version that Al Ewing is referring to, the one he’s writing as bisexual, is the Loki presently featured in Young Avengers. Let me recap the story thus far so you know who I’m talking about, here.

Theoretically, that sounds terrible, but Loki’s actually doing well so far! He seems to feel guilt and some degree of sympathy. He helps his friends even when there is little in it for him. He’s part of a team that strives to do good.

He’s also surrounded by queer teammates (Wiccan, Hulkling, Prodigy, America), so any hesitation he did feel about experimenting with or expressing his own sexuality might be eased. He wants, on some level, to change and grow, which opens up the opportunity for writers to introduce elements of his persona (including his sexuality) that we never saw before in an organic (rather than forced) way. It’s less a marketing tactic and more character development. 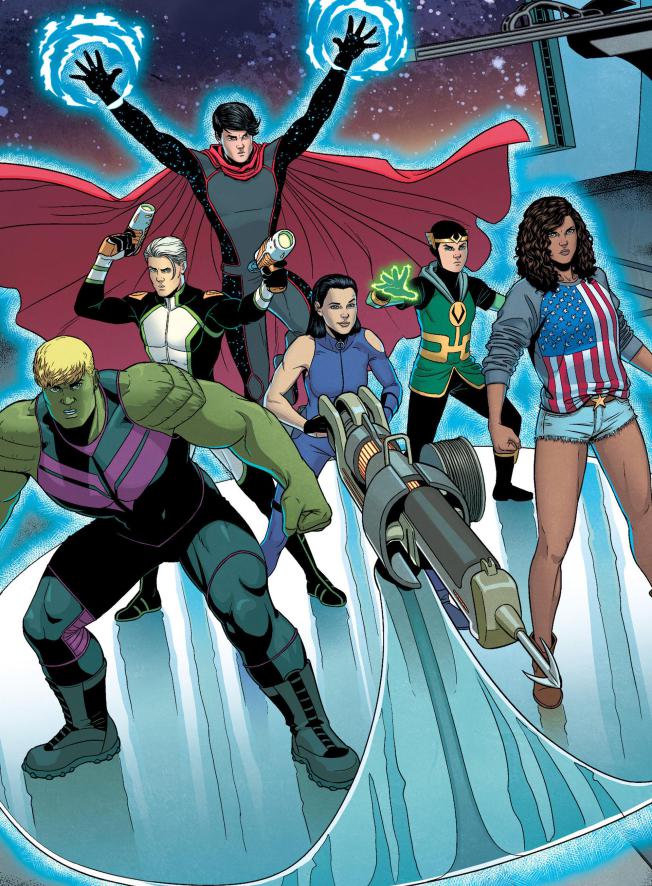 Being gay is not a plot point. It’s not a token that you can say, ‘Look, we have a gay character! Isn’t that great? Aren’t we awesome?’ It’s part of a person and therefore it should be treated as such. It should be one facet of a character rather than the defining description of that character. And I hope that we have, through the writing and the performance of it, we have kind of struck that balance, where the audience learns something more about [our characters], not dependent on their sexuality, but in addition to their sexuality.

So, hey, as long as it’s done right—then I figure … why not?

Big, huge, special thanks to the following people for helping me expand my thoughts about this topic in a constructive way:

Until next time, stay mischievous!

[Editor’s note: in the years since this article was written, Marvel announced an upcoming YA novel starring Loki. Its author, Mackenzie Lee, tweeted in 2017 that Loki is “a canonically pansexual and gender fluid character.” We’ve also received more storylines and panels with input from Loki—especially on the subject of gender fluidity.]

“My culture doesn’t really share your concept of sexual identity. There are sexual acts. That’s it. I’m actually the god of certain popular ones.”

“This is why you get a genderfluid demigod to be your fashion designer.” 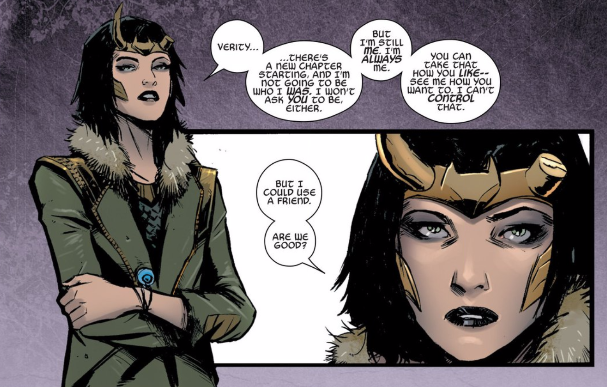 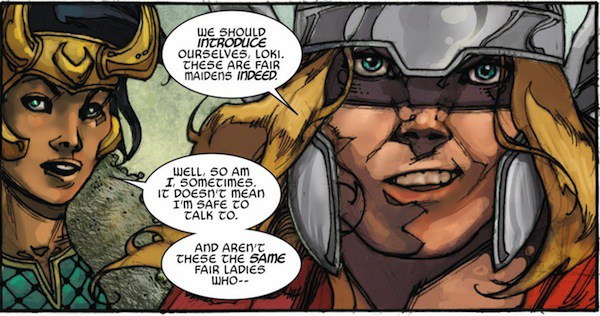 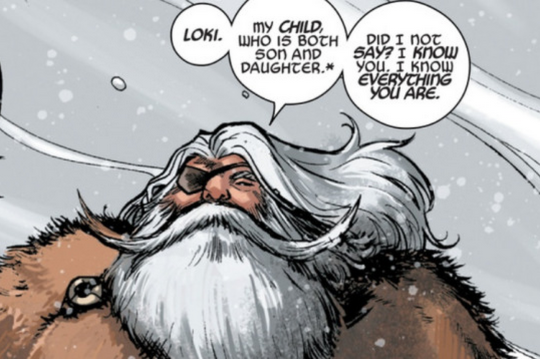 “Loki. My child who is both son and daughter.”

Marlene, better known by her web moniker “ilikecomicstoo,” is a YouTube Partner and blogger with a penchant for—you guessed it—comics. Her day job involves milling around Tumblr HQ but she wears a number of hats, including editor-in-chief of comics.tumblr.