I could literally die right now. 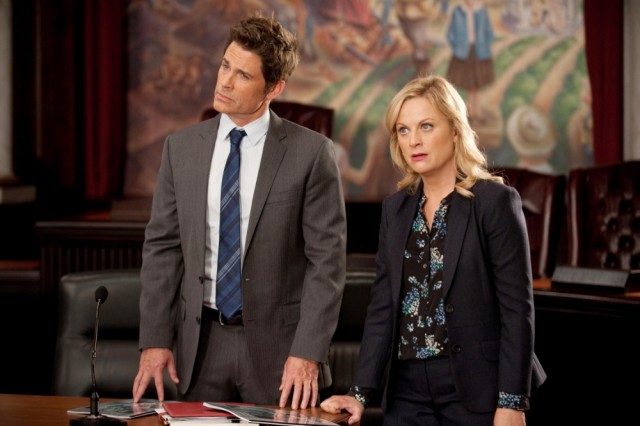 Any linguistic pedant or David Cross fan will tell you that when you use “literally” to refer to something improbable for exaggerated effect, you’re ruining the English language for everyone and contributing to the downfall of humankind. Well, those punk-ass book jockeys can suck it! Google says we can use literally to mean whatever we want now!

As one intrepid Imgur user figured out the other day, when you type “define literally” into Google, the definition includes a secondary meaning: “Used to acknowledge that something is not literally true but is used for emphasis or to express strong feelings.” 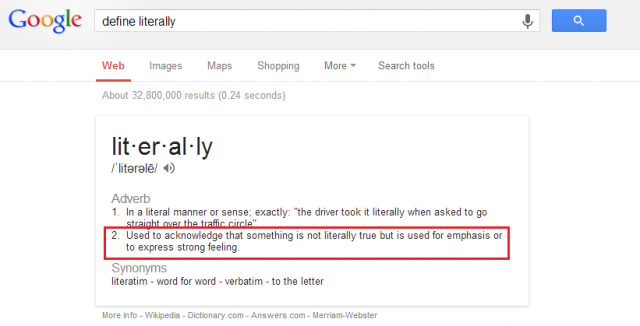 Naturally this has sparked a wave of people blaming the Internet for everything that’s wrong with the current state of the world — or, as the person who uploaded the above image put it, “We did it guys, we finally killed English.” Next we imagine the sky will split open like parchment and every mountain and island will tremble with the weight of the coming apocalypse.

Or you know, the definition of “literally” will just change like it has done for literally (and I’m using the actual literal version of that, so quit your whining) hundreds of years. Language is not a fixed concept, despite our current reliance on dictionaries and rules to keep us in check. The words we use and the ways in which we use them change and evolve constantly. If enough people have used “literally” in a figurative way that a major source of information like Google is taking them seriously, then who are you to complain about it?

Speaking of which, this isn’t even a new phenomenon — Slate reported the exact same finding about six months ago, and in that story, writer David Hagulund pointed out that famous writers like Twain, Austen, and Dickens were using “literally” to mean “figuratively” before you guys were even around to get mad at them. Heck, even Alexander Pope and John Dryden used the word in this way  as early as the mid to late 1600s, and “literally” wasn’t even 100 years old then.

There are so many things to be outraged about, Internet, even just in the world of linguistics. Can we please move on from this? Maybe go back to complaining about politicians who make up words and misquote Shakespeare instead? I’m sure Chris Traeger would literally think you were the greatest people in the world for doing so.

(via MediaBistro, image via Parks and Recreation)