Limor Fried on WIRED Cover: “I Get Dressed Up From Time to Time” 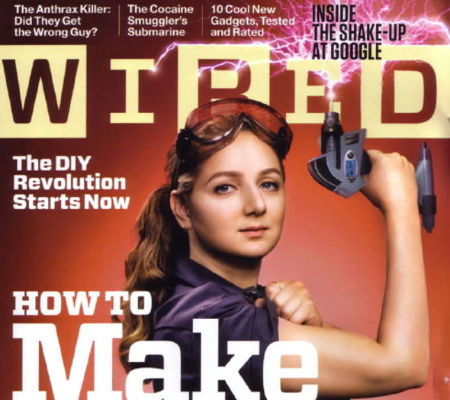 The site GOOD recently posted about how Limor Fried‘s landmark WIRED cover is just absolutely appalling because of its glossy, stylized appearance, making them wonder why they bothered to feature Fried at all if all they were going to do is Photoshop her “beyond recognition.” Because a female in a scientific field should not appear to have any regard for her looks at any time ever, not even for a stylized magazine cover? Because only frumpy women are real women? Well, Fried responded to the post in their comments section, assuring them “that is really what I looked like.”

It’s easy to understand why GOOD — or any woman — would get upset over a woman being chosen for the cover of a major tech industry magazine, only to be objectified and altered into some artificial, glamorous facsimile of a woman known for her smarts and achievements. But that’s not what this is. Limor Fried is being portrayed as a modern-day, techie version of Rosie the Riveter. She is shown , in profile, wearing a workshirt, flexing muscle. But she has long hair and took her glasses off, and it looks like they evened out her skin with makeup, wretched, wretched makeup! So, that apparently cancels out any legitimacy of Limor Fried as a serious female player in technology.

Wired didn’t put Limor Fried on their new cover. What Fried actually looks like is below — she’s a normal young woman with a lip ring and an abnormally strong brain, and that’s worked wonders for her her entire life. What Wired put on its cover is an almost cartoonish Photoshop that caused one friend to look at these photos next to each other and ask, “That’s the same woman?”

And then they posted this picture, which appears on Fried’s own site: 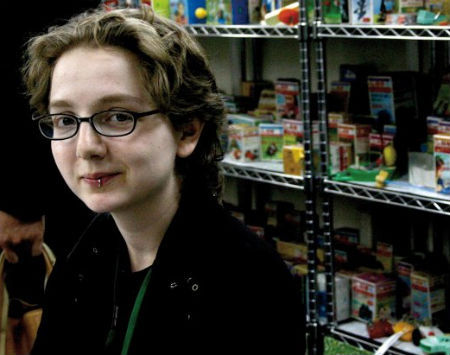 Does GOOD not know how magazines work? They put makeup on men and give them the Photoshop treatment too. And I’m fairly certain that the cover of Linux Journal featuring Angela Byron was also touched up, even the tiniest bit, even though it is not a stylized cover. WIRED could have made a similar choice with Fried’s cover, but they chose to make her an icon for strong women in the tech industry by invoking an historic image used to define women’s contributions to the workforce. How dare they. Limor Fried is in no way being altered to appear as some sexed up librarian fantasy. So I think there’s quite a bit of misplaced outrage. (Weirdly enough, the GOOD article was written by a guy.)

But Fried was actually happy with the cover, and said so in GOOD’s comment section:

You found a 3+ year old photo of me in Japan, after a 20 hour flight and short hair.

The cover is stylized but that is really what I looked like. I was not ‘plasticized’ or ‘heavily photoshopped’. if I take off my glasses, have my hair done, and wear make-up its what I look like. Jill uses lighting and makeup to create a glossy look, we saw the shots right off the camera and the only things that changed are the background color and the tool. Its her style and it looks cool!

Its a bit different than my every day look, especially when shot with a proper camera and lighting, but it -is- me. I do get dressed up from time to time, being a magazine cover is one of those times! :)

If I’m happy with this and I say it’s looks like me isn’t that GOOD :)

GOOD is making a very valid point that needs to be made: powerful women in scientific lines of work who are noteworthy for their minds, brains, and achievements should not be held up to the ridiculous standards of women working in industries that place more value on looks and image (and, ultimately, turn them into sex objects who exist to please men, make women self-conscious, and sell cosmetics and fashion). That, indeed, is a serious issue. But this is not what happened in this case. At all. So let’s chill out on this one and be psyched about Limor Fried.