Limor Fried, Hacker, Maker, and Owner of Adafruit Industries Designs Legos for Girls; Needs Your Help to Get Them Made

So this is pretty much the best thing I’ve seen all day (and I’ve already seen the synopsis for Pacific Rim and two commercial spots for The Dark Knight Rises including one where Catwoman poses as Mrs. Bruce Wayne to steal his car). Limor Fried is an Open Source pioneer, engineer and business owner, and being there for the first Open Source Hardware summit and drafting the Open Source Hardware definition and being the first female tech professional to grace the cover of Wired in fifteen years would be enough to make her a role model for any young science inclined girl. Probably my favorite thing that Fried has done was going up against the mighty corporate power of Microsoft, and winning, when she offered a cash prize for the first person to make open source drivers for the Kinect peripheral for the Xbox 360. Microsoft was by historical default very protective of who could use its hardware and for what, and initially threatened legal action against anyone who would interfere with their desire to keep the Kinect tamper-proof. Fried’s response was to increase the value of the prize by 50%.

So in 2011 when we all (including, by official statement, Microsoft) enjoyed dozens upon dozens of YouTube videos of programmers and animators showing off the Kinect hacks they’d made to create virtual puppets controlled by putting your hand in the air, turn things invisible to the computer screen, and create 3D models of objects simply by rotating them in front of a piece of hardware that cost less than $200, we had Fried to thank.

And so we might have her to thank for the above Lego set, if she gets enough votes.

Fried was inspired, as you might have guessed, by the Lego Friends Line. She told CNET:

After I saw the controversies around ‘Lego for girls,’ I thought about what type of Lego set I would have enjoyed as a kid, and thought about one I would have liked to imagine myself in as young maker,” Fried told CNET. “So instead of complaining about the current state of play sets which aren’t quite inspiring for young girls who may want to be engineers, we worked with [Lego artist Bruce Lowell] to make a workshop like the one I have here at Adafruit. I do this for a living each day and I think it’s important that kids can actually see someone in real-life that is doing engineering so they can imagine themselves doing this too.

The workshop includes a pick-and-place machine, a laser cutter, a sewing machine, a soldering station, a computer, a microscope, shelves of parts and packages, and, of course, Limor herself and her cat Mosfet. 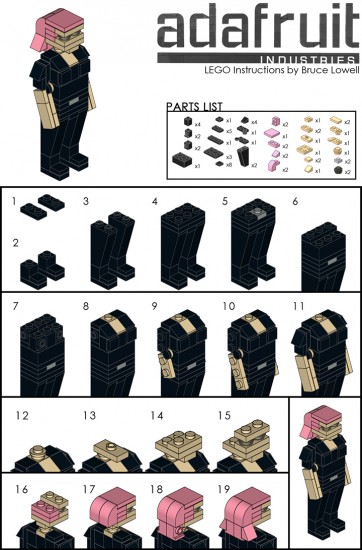 But Fried hasn’t worked out any specific deals with Lego yet… which is where Lego Cuusoo comes in. Cuusoo is Lego’s official crowd sourcing design platform, where any design that meets Legos standards and gets 10,000 votes from the community will get made into an official set. Minecraft Legos are among the sets that have already been put into production by the site, and a Sean of the Dead set was also nearly greenlit until Lego decided (probably correctly) that the movie wasn’t really appropriate for the age range they were targeting and regretfully canceled it. Fried’s set is approved and off to a good start with about 400 votes at the moment, but needs a lot more to reach 10k.

You can vote for it here.