Legos for Girls: A Reprise

It hasn’t exactly been quiet on the Lego front, lately, what with leaked pictures of Lord of the Rings sets, and the release of their DC Universe line. But it’s been pretty quiet on the Lego Friends front, except inside the adult Lego modeling community, who are finding some fabulous ways to turn a cafe kitchen, a disco, and a beauty salon into some sets that are far and away more outside of the tiny gender box that Lego has placed their girls toys in.

Naturally, some are writing about how this advantage to the adult modeling community (that of new figurines, colors, and brick shapes to play around with) proves that everyone alarmed by the gender-specificity of Lego’s line was just being “silly,” and they obviously did not realize that you can make Legos into, like, anything! Lego asked girls what they wanted, and this was it. You can’t blame them for wanting to sell bricks.

First, for what it’s worth, I’d like to say that impressive Lego creations are always impressive. The folks out there who collect the bricks to make them are dedicated people who craft work that delights me, a intense internet user, on an at-least-weekly basis. The idea that they’ve got more to work with from a company that’s notoriously cagey about how it releases its blocks, what colors it uses, and how and where it distributes sets, is great. And for the record, this plane is pretty awesome. If this model was in the spirit of Lego’s girls line, I would probably not have a problem with the line at all. But Lego isn’t encouraging young girls to build aeroplanes. It’s just a nice coincidence.

And now, the deconstruction.

Lego did some serious research to determine just what girls – 50% of the market – like. Their answer is Lego Friends.

Lego did research. This they assured even us, on Twitter, in response to our initial post. At least, until they inexplicably trailed off mid-multi-tweet-sentence. There’s no better response to this statement being used as an excuse for the Friends line than this Sociological Images post. I encourage everybody to read the whole thing, but here’s the salient bit:

Executives are going to great lengths to explain that the line is based on research, using anthropologists who spent time with girls in their homes. The frame gives the company an excuse for reproducing the same old gender stereotypes that we see throughout our culture.  They can shrug their shoulders and say, “Well, what are we to do? This is what girls want.”  In this way they are trying to make it clear that they shouldn’t be held accountable for the messages their products send…

The market research manager sums up Legos’ impression of what girls want this way: “The greatest concern for girls really was beauty.”

Sociological Images juxtaposed that sentence with this Lego ad, from 1981. 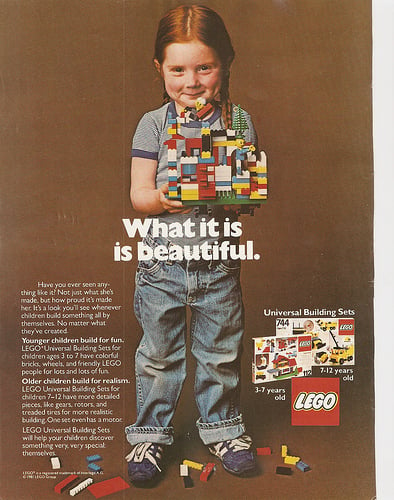 If you asked a little girl what she wanted for dinner if she could have anything, she might say marshmallows, but you probably wouldn’t give them to her. Beyond that problem, in this case, is that young girls have already been told what they want by mass media. Peggy Orenstein, author of books on the effect of mass media on girls, talks about this in Cinderella Ate My Daughter. From The Daily Beast:

Disney alone has 26,000 Disney princess items on the market today, part of a $4 billion-a-year franchise that is the fastest-growing brand the company has ever created. “What these companies will tell you is that girls want this, so they give it to them,” says Orenstein. But for girls who don’t want to play with pink princess toys, there’s virtually no other option…

…that marketing hasn’t told them is for boys instead. Orenstein’s book focuses mostly on the “princess” trend in marketing to girls, but her points are relevant to Lego’s take on femininity, which prominently includes stereotypically nurturing or body-conscious roles for girls to play.

The more mainstream media girls consume, the more they worry about being pretty and sexy. One study, from the University of Minnesota, found that just seeing advertisements from one to three minutes can have a negative impact on girls’ self-esteem.

Orenstein is the first to admit she’s not a perfect parent. But her advice to others is to pride yourself on saying no. “People have said to me, ‘Don’t you feel like you’re brainwashing your daughter because you’re not giving her the choice of what she consumes?’ ” Orenstein says. “But there’s not really a choice. Disney isn’t giving you a choice.”

Sociological Images also talks about the quiet fact that there is no “control group” for Lego’s research, only children already indoctrinated by mass media… and that Lego is at least partly complicit in the fact that few people consider Lego to be a toy for girls.

According to Business Week, Lego has spent most of the last decade focusing their products on boys.  They have deliberately designed products that they expect will appeal to boys and included boys almost exclusively in their marketing material. Today Legos are shelved in the boy aisle is most toy stores.

So, basically, what Lego has done over the last few decades is take a truly wonderful gender-neutral toy, infuse it with boyness, and tell every kid who’ll listen that the toy is not-for-girls.  Now, stuck with only 50% of the kid market, they’re going after girls by overcompensating. And, to top it all off, they’re shaking their heads and doing “science” to try to figure out girls, as if they’re some strange variant of human that regular humans just can’t get their head around.

Ah, but wait! All of this argument is supposed to be rendered moot by saying “Lego is in the business of selling bricks.”

This is a very familiar argument to those who like to point out that female superheroes are drawn to be viewed voyeuristically by (straight) male readers, while male heroes are not drawn for (straight) women’s voyeuristic gaze. “You can’t blame them! Sex sells!” comes the answer. Frankly, the concept that if a practice is turning a profit it must be morally unassailable is badly flawed. We criticize retail outlets constantly for immoral but economically efficient practices like substandard worker pay and contributing to environmental pollution, why is it less legitimate to criticize them for social issues as well? We can argue about which of these causes are most important to solve, but hopefully there’s no denying that stereotypes are harmful in the first place.

This is gender stereotyping. It is the rigid compartmentalization of interests that any child should be able to freely explore into separate categories, and that is bad for children of both sexes. If it was any other kind of stereotyping, would the excuse “well, it sells units” be used?