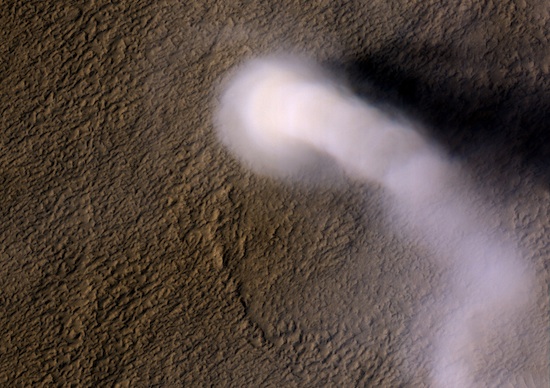 The HiRISE camera aboard the Mars Reconnaissance Orbiter has already shown of its ability to photograph minute details of the Martian surface, even meteorlogical evens like dust devils and spring thaws. The HiRISE camera recently spotted another dust devil spinning across the surface of Mars, but this one dwarfs its predecessor being an incredible twelve miles tall.

The last Martian dust devil the HiRISE observed was reckoned to be about a half-mile tall and 100 feet across. This latest one is 24 times as high, but slightly wider  — probably about 180 feet wide. For comparison, most tornadoes on Earth are a few hundred feet tall while even strong tornadoes only extend about 10 miles into our atmosphere.

According to the HiRISE website, the reason we see such large dust devils on Mars is because of the light atmosphere and low amount of water vapor. Unlike tornadoes, which are powered by enormous thunder storms, dust devils form from the interaction of winds across the ground and rapidly rising warm air. Because the Martian atmosphere is so thin, and the change in temperature between the ground and the air more dramatic, dust devils can rise far higher.

However, because Mars’ low amount of water vapor means we doesn’t see the same kind of dynamic weather as on Earth. As such, a full-blown tornado can’t form on Mars. What’s more, that thin atmosphere means that even if you were caught in the middle of this enormous dust devil, the winds would probably not be strong enough to knock you over.